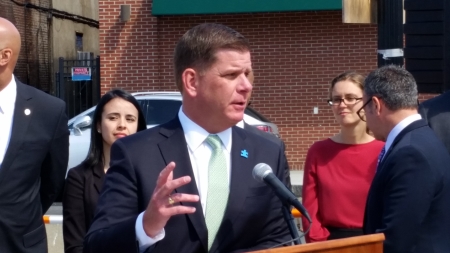 EAST BOSTON — The mid-day, cloudless blue sky over Central Square in East Boston last Thursday was the perfect setting for Boston Mayor Marty Walsh to announce a major five-year capital spending initiative.   It was an auspicious time to let the public know that the city is to ready to get to work, attending to the things like new schools, renovated libraries, sidewalks, streets and public parks.

Amidst the dug-up sidewalks, Jersey barriers, and construction equipment in chaotic Central Square, the mayor was on hand to announce an ambitious $2.08 billion capital spending plan.  Just a week before, the mayor released his $3.14 billion city operating budget that focuses on the day-to-day operations of city government.

But the capital budget is all about big-picture thinking, most of it jotted down with the participation of the 14,000 residents who plotted what’s called Imagine Boston 2030.  “It builds on three years of smart, responsible, and sustainable fiscal strategy,” declared Walsh.  “It touches all of our neighborhoods, making important investments in our students, public safety, and more.”

And more importantly to Mayor Walsh, the new capital plan is an opportunity to set itself apart from the discord in Washington D.C.  “During these uncertain political times for our country, this budget positions Boston to manage through instability at the national level,” he said surrounded by a flock of his top administrators.

The subtext delivered is that Boston is ready to go alone on matters such as climate change where the city will continue to promote energy conservation, coastal management, and green energy.  Such issues are not at the top of the Trump Administration’s agenda.

The city’s capital budget is a big to-do list.  The Boston Public Schools department will see $1 billion to upgrade school buildings.  To make streets safer for pedestrians, cyclists, and motorists alike, the new capital plan calls for spending $709 million over the next five years.  First responders like police and fire personnel will see renovated workplaces such as the new East Boston Police Station, which is now in a cramped location less than 1,000 feet from where the mayor made his remarks.  “It always feels likes Christmas,” noted outgoing District 1 city councilor Sal LaMattina who represents East Boston, the North End, and Charlestown.  Capital budgets do make city councils feel spoiled by Santa Claus, as LaMattina termed it.

Every neighborhood will see a slice of that money from Jamaica Plan to Roxbury to South Boston and the North End, Dorchester, Mattapan, Allston-Brighton, and beyond.

Much has been made of the mayor’s goal to build 53,000 new units of housing by 2030 “so that everyone has a place in Boston to call their home.” The city isn’t allowed to use capital dollars to support private housing directly but it’s clear that Walsh knows that public infrastructure –– well-lit, safe streets, and other amenities such as parks and new school buildings — are key to drawing in private housing construction.

Those tangibles along with an active civic culture are producing results in East Boston where private development is currently bursting at the waterfront’s seams.  “I want to give a shout-out to Mayor Walsh for not forgetting us on this side of the water and making us viable,” said David Arinella, a longtime resident and board member of a local foundation. “East Boston is now ‘HD’ which is not ‘high definition’ but rather what we call ‘highly desirable.’ These improvements will go a long way towards improving quality of life in Eastie.”

The other side of the water has been booming since the end of the recession.

“The Great Boston economy enjoys an embarrassment of riches,” wrote George Donnelly in his job-market handbook, The Boston Economy:  Understanding and Accessing One of the World’s Greatest Job Markets. “Perhaps no regional economy in the country has more depth and balance than Boston.”  Such claims are supported by the ample evidence of multi-sectored clusters such as higher education, health care, software, and finance — all objects of foreign direct investment.

The green shoots that were humbled by the Great Recession are now taller and stronger.  The city’s population is increasing, reversing a decline.  The unemployment rate for February 2017 is 3.4 percent. Its tax regime is competitive for homeowners (in a city where eager-to-play businesses shoulder most of the property tax burden).  Immigration and its entrepreneurial streak have revitalized several neighborhoods while the city continues to draw thousands to its institutions of higher education.

As a manager, Walsh finds himself in a fiscal sweet spot awash in resources while touting what passes for fiscal conservatism.  Debt service will continue to remain under 7 percent of general fund expenditures through the last year of this capital plan.  Moreover, Wall Street has great faith in Boston, showering it with lower bond interest rates.  Moody’s Investors Service and Standard & Poor’s recently rated Boston’s credit as triple-A.

Not all is the sweetness and light of a spring day in Central Square Park, however.

Sam Tyler, President of the Boston Municipal Research Bureau, says the Walsh administration is thinking creatively “to expand the reach of the capital budget” beyond general obligation bonds and grants from federal and state governments.  A few examples are the use of surplus funds from the Parking Meter Fund, savings from reduced energy consumption, better utilization of funding from the School Building Authority, and proceeds from the sale of the Winthrop Square garage.

“Meeting the added capital needs from the City’s various planning initiatives and staying within the debt service standards will be a challenge,” he said, pointing to the ambitious array of programs under Imagine Boston 2030 such as Build BPS (school construction), Go Boston 2030 (transportation improvements), Boston Creates (public support for the arts), and Climate Ready Boston (climate disruption mitigation). However, he stated that the Walsh administration believes it is confident it can fund these capital projects and keep the city’s debt service costs within its standard of 7 percent of the operating budget.  He noted that the mayor is relying on proceeds from the sale of the Winthrop Square garage to fund capital projects even though this revenue source has yet to be approved.  That plan still requires the support of not only the city council but the state legislature and governor and would direct funds to capital improvements in Franklin Park, Boston Common, and elsewhere.

The capital spending plan comes months before the city’s mayoral election, in which he faces Boston City Councilor Tito Jackson — a fact not lost on Walsh and his supporters who made up most of the press conference audience.  Fixing sidewalks and building new gyms are good reminders for voters that that mayor enjoys the power of incumbency and its purse strings.

Read the original article at NewBostonPost.com