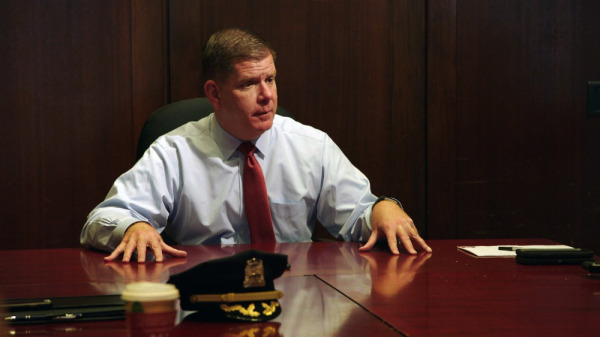 Running over four and a half hours, this documentary on Boston mayor Marty Walsh’s administration is a testing but rewarding study of democracy in action.

It’s been seven years since the Boston Marathon bombing put the Massachusetts capital in the headlines for all the wrong reasons, and beyond the odd bright flash of #BostonStrong graffiti on a shabby streetscape, it’s not discussed directly in “City Hall.” It doesn’t need to be: Its community-wide burden of grief, caution and a shared responsibility to rebuild is felt throughout Frederick Wiseman’s typically sprawling, inquisitive and inclusive anatomy of the city’s inner workings. Putting his hometown under the lens for the first time in his vast career, the 90-year-old documentarian — now resident in Paris — finds it in imperfect but hopeful flux, taking stock of its social diversity, inequalities and future priorities under the conscientious leadership of Democratic mayor Marty Walsh. The result is both sober and inspiring: an urban progress report taking into account a plethora of government services, scutinized by Wiseman’s patient but unblinking eye.

On the one hand, “City Hall” feels like quintessential Wiseman, slotting comfortably alongside the director’s other major institutional studies — including the recent “Ex Libris,” “At Berkeley” and “In Jackson Heights” — with its fixation on administrative process and community discourse, and an uninhibited running time that doesn’t shy from the drab procedural business that most filmmakers would swiftly excise to get to the rhetorical point. At 275 minutes, it’s one of his more committed sits: His last feature, 2018’s small-town portrait “Monrovia, Indiana,” looks snack-size beside it.

Yet in certain key senses, the film is an unusual Wiseman work, not complacent in its gaze or approach. More insistently political than most of his films, albeit through observational emphasis rather than direct editorialization, it’s also rare in its character-driven nature, allowing a clear protagonist — a hero, even — to emerge from its many diffuse scenes of everyday life across a broad social and professional spectrum. Ruddy-faced and affable, with a Beantown accent as thick as chowder, Walsh isn’t a constant presence in “City Hall,” but when he isn’t shown speaking, attentively listening or glad-handing the public, the mayor’s constructive, conversational brand of statesmanship permeates the film’s other scenes of government in action.

Well before he’s shown in a speech saying, quite earnestly, that “we put social justice at the heart of our mission,” Walsh is effectively presented as the anti-Trump: a decent, unassuming man of working-class origin — the son of Irish immigrants — less preoccupied with his political status than the public obligations that come with it. Walsh, who has been in office six years to Trump’s four, tacitly notes the chasm between him and the current commander-in-chief: “We were used to going right to the White House when Obama was there,” he says, upon announcing plans for lobbying on education and climate change. “We haven’t done that with this president.” A sense of weary exasperation hangs in the air, and it isn’t his alone.

In the interim, then, Walsh and his administration have resolved to make Boston an example of a forward-looking democratic city, weathering the surrounding chaos of the country. “We can’t solve the problems of the United States of America in here,” he says, before more optimistically venturing that “all it takes is one city” to begin wider change. It’s a noble mission statement, but “City Hall” methodically shows it being put into the practice from the ground up — or at least from the gloomy concrete bowels of the eponymous building outwards. That roomy runtime allows Wiseman to examine how the city functions at every level, from Walsh’s first-hand policy meetings in wood-paneled suites to public consultations on planned developments in drafty community centers, from a no-frills but emotive same-sex wedding at the registry office to the physical and mechanical rhythms of sidewalk garbage collection.

Much of this material is, by necessity, mundane, yet Wiseman’s trick is to make us watch it in such detail that we invest in it nonetheless, finding fine lines of tension amid the formalities. Just as he and cinematographer John Davey linger on the iron-jawed guzzling of the garbage truck to near-hypnotic effect, so do various board discussions and conferences — on issues ranging from affordable housing to racial representation in the workforce — gradually fascinate with politely spoken discord and more angrily unspoken tension. More than any other filmmaker, Wiseman has found cinematic value in the slow tennis match of an institutional meeting, with its lulling back-and-forth volleys and hard-won point-scoring.

Not everything goes well, even with the best intentions of Walsh’s team, as residents bristle over a deep-seated sense of disenfranchisement, their trust not yet won. At one public meeting over the imminent opening of a cannabis store in the run-down Dorchester area, a Black woman fears the government is only paying mandated lip service to their concerns. “After we talk, we vent, we cry, we laugh — what happens then?” she asks. “If you have good intentions, forget the requirements: communicate with us.”

Mayor Walsh isn’t on hand to reply with benevolent assurance: Much as the film is on his side, it’s not unrealistic about the limitations of his power to make every unprivileged Bostonian feel heard. One of the film’s most heartbreaking vignettes, also far outside Walsh’s daily rounds, follows a pest-control inspection at the damp, rat-infested apartment of a middle-aged bachelor, whose initially chipper-against-the-odds demeanor soon crumbles when he has the inspector’s briskly sympathetic attention: “My spirit’s broken,” he admits.

Between the political and administrative machinery that Wiseman observes from a coolly admiring distance, he tucks small episodes of such concentrated human drama, though not all of it is downcast. One wry, touching sequence follows men at the city hall’s loftily titled “hearing room,” sincerely explaining their way out of parking tickets. A new father, who admits he parked in a blind panic when his wife entered labor, is let off: Even at this trivial level, it seems, Walsh’s government can accommodate both the law and gentle human reason.

There’s no mistaking the film’s pro-Walsh, pro-Democrat stance, even if it doesn’t have to work overly hard to enforce it. Wiseman’s methodical filming style, and decidedly light hand as an editor, work to lay out the city’s way of doing business, and viewers can decide for themselves if they like what they see. (If they don’t, in the admittedly unlikely event that they’re still seated after nearly five hours, perhaps they might ask themselves why.) Now in his tenth decade, Wiseman’s formal filmmaking principles remain steadfast, and “City Hall” benefits from his control and reserve, as well as well as the probing stamina of his camera. But in a moment of escalating political crisis in America — and let it be said, “City Hall” stops before the despairing onset of the coronavirus era — he isn’t afraid to show us what he likes.