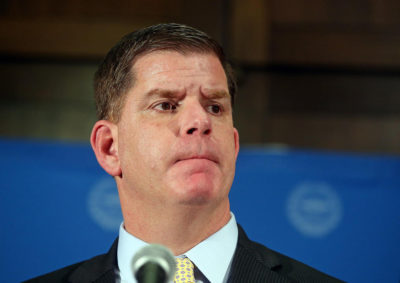 Mayor Martin J. Walsh will present a more than $2 billion capital plan today, with half the budget going to school building improvements and another $700 million invested in transportation projects.

The five-year, $2.08 billion plan would make infrastructure investments in  every city neighborhood, according to a press release. The capital plan calls for spending $709 million on projects outlined in the city’s Go Boston 2030 transportation plan, which promotes public transit, walking and cycling over using cars, and calls for investments in smart traffic signals and rapid transit buses.

The capital improvement plan also looks to invest in Franklin Park and complete the Emerald Necklace, encourage affordable housing, and use 1 percent of its capital borrowing — about $1.7 million — for arts projects.

That borrowing is set to increase by more than 22.5 percent over last year’s plan, according to a press release. And the plan calls for significant one-time funding sources, including using more than $100 million from the sale of the Winthrop Square Garage, along with Parking Meter Fund surplus funds.

“This capital plan prioritizes investments in Boston’s neighborhoods and is a direct reflection of the feedback we received from thousands of residents who contributed ideas to our planning processes,” Walsh said in a press release. “I am proud that we are able to put  the wheels in motion to begin investing in projects that are important to Boston’s people, and that will prepare our city for a year of groundbreaking  success.”

The capital plan proposal comes  after Walsh officially submitted his $3.14 billion operating budget to the City Council yesterday. That budget was an increase of $143.7 million, or 4.8 percent, over last year’s budget.

The City Council must approve both operating and capital budgets before fiscal 2018 begins on July 1.

Read the original article in the Boston Herald here.