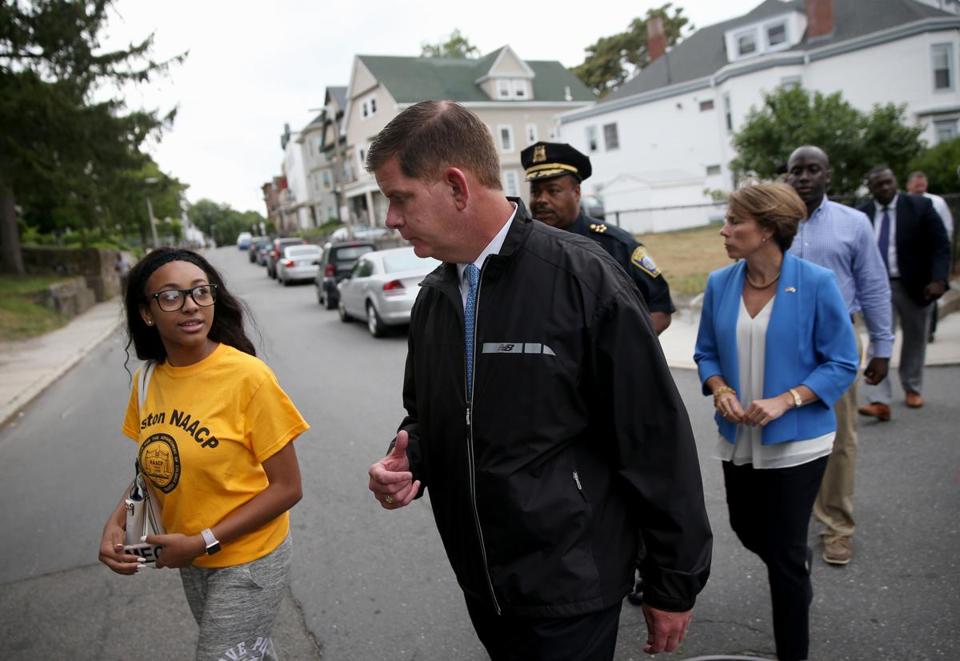 RECENT DEBATES OVER immigration enforcement have focused on the role of local police in the community. This issue is not new for Boston. We’ve been working on it for years. We’ve found that when it comes to public safety, building trust is more effective than stoking fear. Consider one day last fall. We were walking down Warren Street with other city officials, pastors, and police officers. We spoke with families at the Roxbury YMCA; we stopped by Little Scobie Playground; and we visited with seniors at Rockland Street Elderly Housing. Our group kept growing, as more and more neighbors joined us along the way.

When we circled back to the Warren Gardens Housing Co-Op, we saw a large group of kids running toward us. They surrounded Bill Evans, commissioner of the Boston Police Department, competing for high-fives. It was a wonderful thing to see. This was group of kids from a neighborhood that has seen a lot of violence in its long history. They recognized their police commissioner right away. And they were so excited to greet him that they almost knocked him over. That’s a good sign.

This trust doesn’t happen by accident. It’s earned. It’s the result of years of teamwork between members of the community, City Hall, faith leaders, the police, and local activists. Over the last three years alone, we’ve brought violent crime down by 9 percent and property crime down by 16 percent in the City of Boston. And just as important: We’ve driven down crime while making 25 percent fewer arrests since 2014.

How is that possible? Reducing crime starts with lifting communities up. It’s all about using our resources to invest in education, housing, and employment. And it’s about building a culture of trust between the community and the police.

That’s what happened when clergy, social workers, and police worked together to reduce the homicide rate in the “Boston Miracle” of the 1990s. That was our goal when we invited homicide survivors into City Hall on the first day of the new administration in 2014. That was our goal when we created the Office of Public Safety, which operates with a philosophy of lifting people up, not locking people up.

All these things have helped community members and police officers to get to know one another — and work together to make our neighborhoods safer, healthier, and more prosperous. That is the definition of effective community policing. And major crime rates are the lowest they’ve been in a decade.
The new administration in Washington has a different philosophy on law enforcement. It wants our police officers to detain community members based on suspected immigration status, even if they have not been charged with a crime. This is not their job, and it never has been. It would take them away from more effective community policing work that has proven so successful. And it would erode the trust we have worked so hard to establish over many years in Boston.

Representatives of the administration have even claimed that if a city doesn’t force its police to round up immigrants, then it must not care about stopping crime. This argument is seriously misguided — and it’s simply untrue. Our police need residents to trust them. Only then do people feel safe enough to come forward, report crimes, and help with investigations. The administration essentially wants to turn local police into Immigration and Customs Enforcement (ICE) agents. This approach would do little to prevent terror attacks, and it would actually make our communities less safe. Cities all over the country, in both blue states and red states, know this to be true.

The data back us up. Earlier this year, Thomas Wong, a professor of political science at the University of California, San Diego, analyzed counties from an ICE data set. He found that large metropolitan areas ICE identifies as “sanctuary cities” had fewer crimes per capita than nonsanctuary cities. What’s more, they had higher median income, less poverty, and higher employment rates. Studies have also shown that immigrants commit fewer crimes than people who were born in the United States.

It’s much easier for police to investigate crimes when residents feel safe talking to them. And when families stay together, it’s possible for people to pursue education, find employment, and contribute to our economy.

Victims of domestic violence illustrate just how destructive the opposite approach can be. Too many people (women and children in particular) are afraid that if they call the police for help, they or a family member could be detained or deported based on immigration status. So they continue to suffer in silence.

In Boston, we will not turn our local police officers into ICE agents. We know that protecting our most vulnerable residents makes our city safer. And our city has a long history of doing just that. That day last fall in Roxbury, when the kids ran to greet Commissioner Evans, we were taking part in one of the Twelfth Baptist Church’s weekly peace walks. They started back in the early ’90s, after homicides skyrocketed in Boston. We’ve embraced the peace walk and all it represents once again — bringing it to more communities that have suffered from gang violence, such as in East Boston last year.

We are far from perfect. But the data, and, more important, our neighbors tell us that we are moving in the right direction. In Boston, we will not undo all this good work. When we walk together, we listen better. We understand each other more completely. Every step we take makes that culture of trust stronger. And that’s how we build peace. We won’t turn back now.

Martin J. Walsh is the Mayor of Boston. The Rev. Jeffrey L. Brown is associate pastor at the Twelfth Baptist Church in Roxbury.

Read the original Op-Ed in the Boston Globe here.