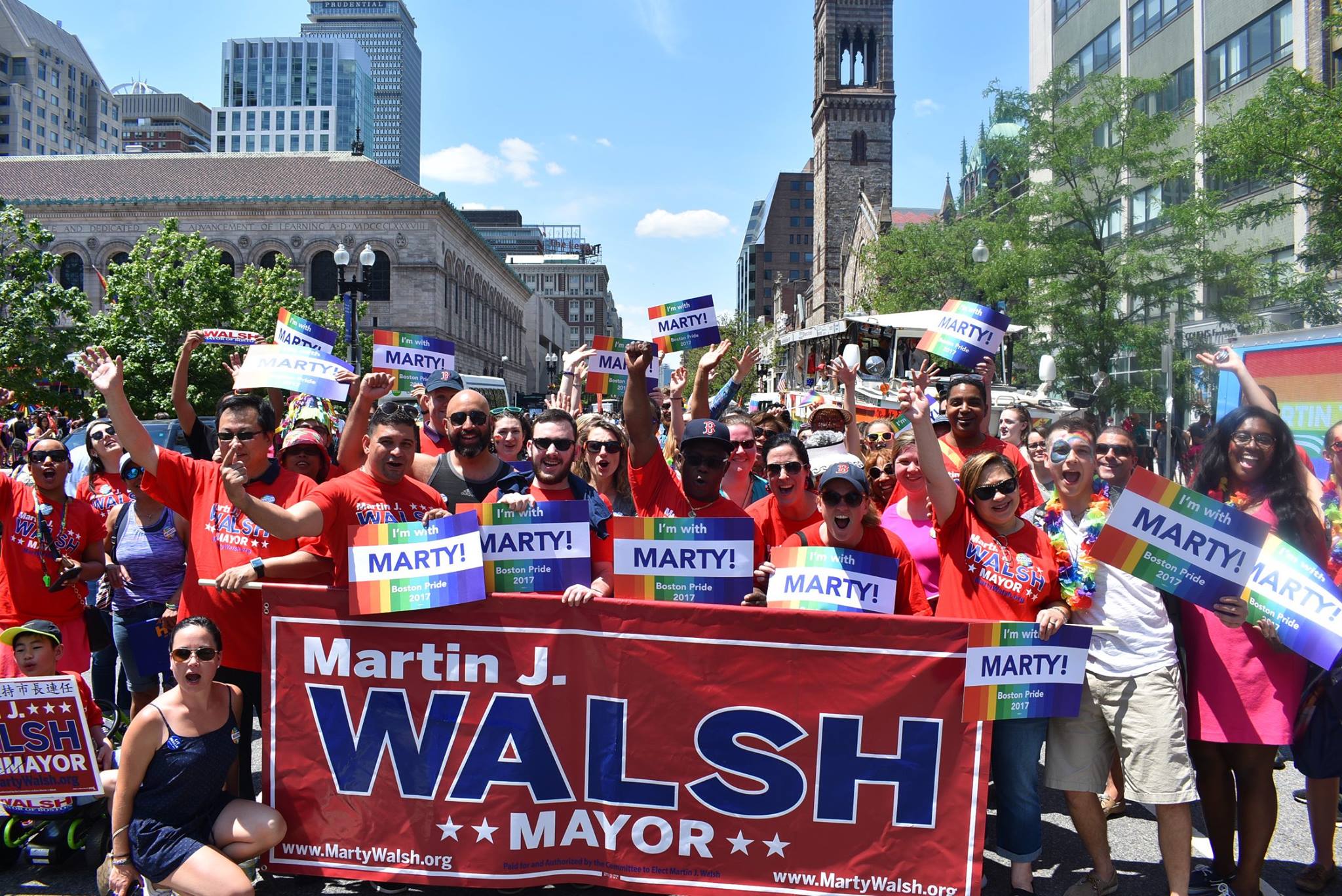 BOSTON, MA – Friday, June 9, 2017 – Prior to the Boston Pride Parade this weekend, LGBTQ leaders and community members announced their support for Mayor Marty Walsh’s reelection for Mayor of Boston. The leaders cited Walsh’s long history of standing up and fighting for the LGBTQ community and his ongoing commitment to equality.

“I am honored to have the support of these incredible public servants, community leaders, and residents, who believe that Boston is, and should remain, an inclusive city that respects marriage equality,” said Mayor Walsh. “Thirteen years ago, we rallied together so that Massachusetts could become the first state in the nation to allow same sex couples to get married. This is Boston’s identity. Together, let’s continue to invest in our community and the future of Boston.”

“Since his earliest days in public service, Marty Walsh has been a fierce ally to the LGBTQ community. He has more than fulfilled that legacy as Mayor of the City of Boston; he has been relentless in advancing equity and protections for transgender and gender nonconforming individuals, marginalized youth, and our elders. As ugly debates about the dignity of LGBTQ people, immigrants, people of color, and religious minorities continue to swirl at the national level, Mayor Walsh epitomizes Massachusetts values of inclusion and tolerance. I am proud to endorse Marty for Mayor of Boston.”

“Mayor Marty Walsh is a strong leader who cares deeply for all people. As a legislator during the marriage equality debate, he played a major role in the negotiations and provided a crucial bridge between our communities and those who were undecided. I am grateful for Mayor Walsh’s unwavering drive, compassion and vision.”

“As an out member of the LGBT community and state legislator it is my honor and pleasure to enthusiastically endorse Mayor Marty Walsh! Every step of the way along to march to equality Marty Walsh has been there for our community. Long before it was easy to take a stand in support of marriage equality Marty was there speaking out and doing what was right and fair. Our LGBT community has no greater or more steadfast supporter than Marty Walsh.”

“Mayor Walsh is a local leader who gets it.  He puts Boston on his shoulders and carries us through thick and thin. He is always up front fighting alongside us for our rights and for equal justice. He knows it’s always someone’s 1st Pride! And until there is full equality across all spectrums of our community, Mayor Walsh will work tirelessly on behalf of the LGBTQ community. I’m thankful he is and always will be part of Boston Pride.”

“Marty Walsh has been a stalwart in his support of the LGBT community for over 20 years.As a state legislator, Marty not only supported every single LGBT issue we fought for, he actively engaged in our battles for equality. Marty would ask us, “How can I help,” and was willing to take on some of the toughest assignments. Marty never shrank from a fight for LGBT equality. When we needed him, he was there for us. As Mayor, he has continued that tradition. The LGBTQ community has a rock solid friend in Marty Walsh and the feeling is mutual.”

“Marty has always been a leader on LGBTQ issues. I first started working with him when he was a very early supporter of marriage quality. During Justice Month, he announced he will be taking a leadership role in ending the HIV epidemic in Boston. I can’t think of a better ally for our community in City Hall.”

“Mayor Walsh is a man of great courage. He was a very early supporter of marriage equality and whenever I see he him he never fails to ask me about my husband Jacques and that means a lot to me, he remembers and he cares. When a bus load of anti-transgender activists came to protest in Boston our Mayor immediately raised the transgender  flag over Boston City Hall Plaza in a display of solidarity with the LGBTQ community. He has never wavered in his support and has the courage to always do what is the right thing and not just what is politically expedient.”

Walsh has a long history of strong support for the LGBTQ community. Mayor Walsh’s leadership on marriage equality started early in his career as State Representative when he helped lead the effort with MassEquality and the Massachusetts Gay and Lesbian Political Caucus to stop the anti-gay marriage constitutional amendment. He is credited by state and national LGBTQ rights organizations as one of the key influencers in making marriage equality a reality in Massachusetts.

Mayor Walsh strongly believes that LGBTQ equality is a human rights issue. The following efforts listed are a few examples of his advocacy work: