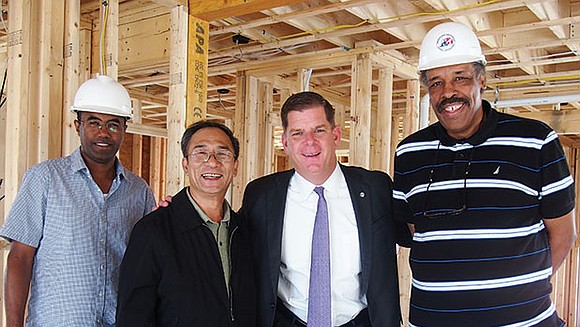 Bay State Banner, June 14, 2o17 – The gray single-family home on Dorchester’s Trull Street with its tidy back yard is a world away from the Castle Square development in which Renee Omolade grew up, but for the last month and the foreseeable future, Trull Street is her home.

Omolade bought her home through the city’s Neighborhood Homes Initiative, a program through which the Department of Neighborhood Development has identified 250 parcels of city-owned land for housing construction. Hers is one of the first 69 units built through the program.

Last week, Mayor Martin Walsh and other city officials toured several of the homes, including Omolade’s.

“Trull Street has a lot of homeowners,” he told Omolade of her new neighborhood of single- and two-family homes. “It’s really solid. People have been here a long time.”

Omolade’s new two-bedroom home, painted in two shades of dark gray with white trim around its black-framed windows and doors, features a steeply gabled roof that fits in nicely with the older Victorians on the side street, which intersects with Hamilton Street near Upham’s Corner.

Under the Neighborhood Homes Initiative, private developers build on the lots using DND funding to help keep the costs affordable for first-time homebuyers. One-third of the homes built through the Neighborhood Homes Initiative are deeply affordable, one-third are moderately affordable and one-third are market-rate. The homes range in price between $294,000 and $425,000. They are affordable to households with a combined income between $60,000 and $100,000 a year.

The homes are built in accordance with DND’s standardized building plans, which were vetted by community groups and are intended to fit in with the look of existing neighborhood homes. The designs are pre-approved by the Inspectional Services Department – a provision that helps builders get through the construction process more quickly.

In some areas, like Trull Street, the city owns single parcels of developable land on which a new home is built. In other areas, like on Harold, Waumbeck and Crawford streets, the city owns multiple parcels that are being developed by a single developer — in that case, the Roxbury-based Windale Development.

On Harold Street, Walsh and other city officials toured one of the 16 single- and two-family homes being built by Windale Development with principals Arnold Johnson and George Chin.

“We’re going to bid on some more of these,” Johnson tells Walsh.

“We’d love to see you bid on some packages,” the mayor responds.

Back on Trull Street, Omolade says she heard about the Neighborhood Homes Initiative through the Boston branch of the NAACP.

“So, what do you think of the program?” Walsh askes her.

“It’s an excellent program,” she says. “It is hard to qualify. A lot of people make too much money. That’s the challenge. But it offers a tremendous opportunity to young people if they do it at the right time.”