Mayor Walsh: Boston ‘Will Not Back Down’ Regarding Climate Change 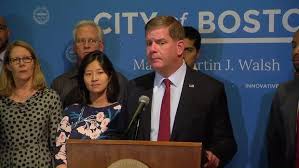 Boston Mayor Marty Walsh, a vocal critic of President Donald Trump, said his city won’t “back down” if the White House walks away from the Paris climate accord.

Walsh’s comments on Wednesday came after reports emerged that Trump had decided to withdraw the U.S. from the historic 2015 agreement, which he had promised to do so during the 2016 campaign.

“As a coastal city, we know what’s at stake,” Walsh said, adding the city will remain committed to investing in its clean energy industry.

He also quipped President Trump “has to look outside his little bubble” when it comes to climate change.