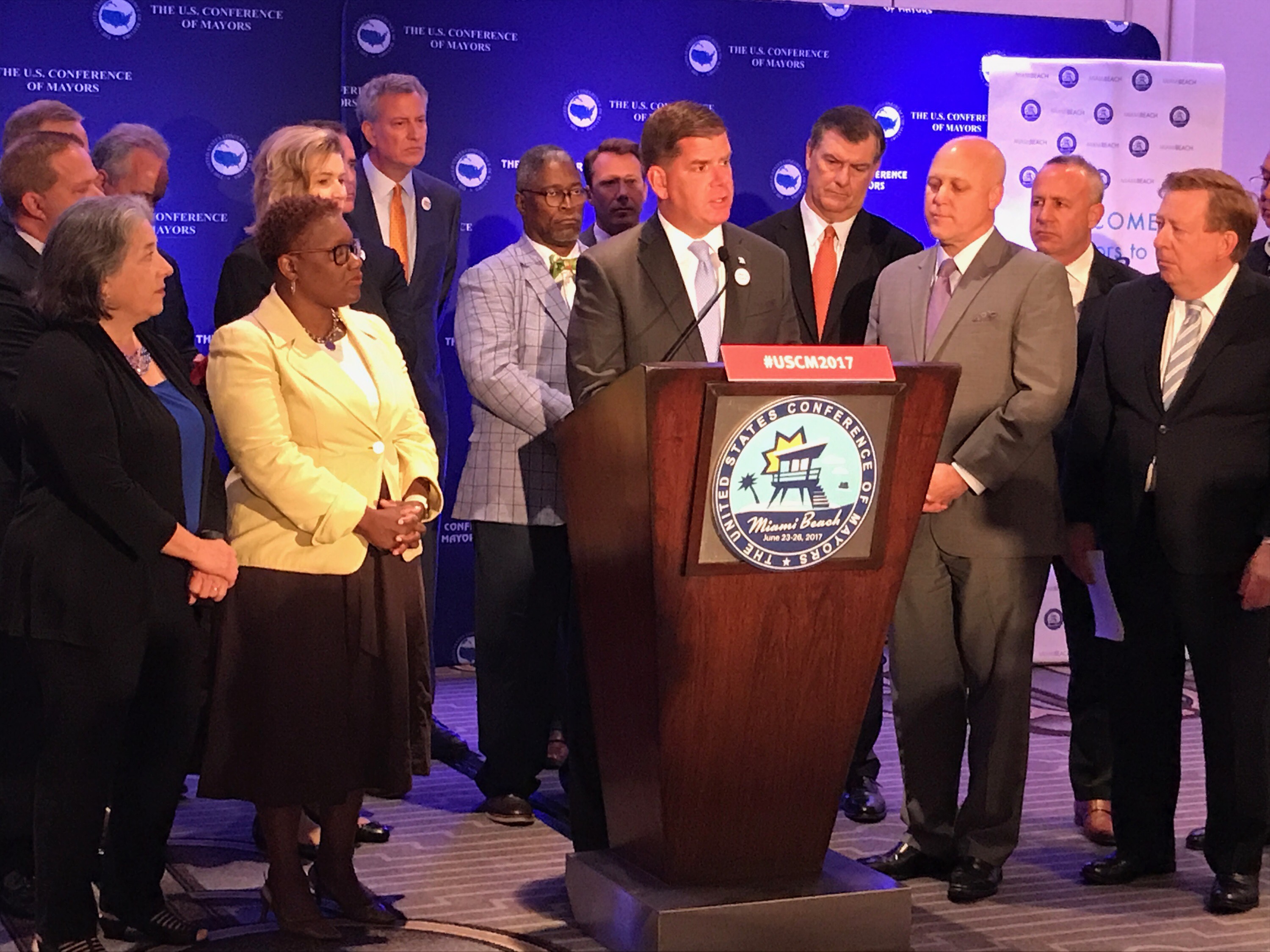 June 24, 2017 (Miami, FL):  Boston Mayor Marty Walsh joined mayors from across the nation in challenging the Senate healthcare bill at the U.S. Conference of Mayors today, saying it “turns its back against our most vulnerable,” and would harm Boston and Massachusetts.  Walsh stood united with health care advocates back in Boston and a chorus of people from all over the country. They spoke against repealing and replacing the Affordable Care Act with legislation that will lead to more people uninsured and uncertain about the future of their health coverage.

“The new health care plan will throw millions of people’s lives into turmoil,” said Mayor Walsh. “As mayors, we see and hear about people in our cities struggling every day. We know how this will affect them. People with pre-existing conditions will be denied coverage.  Lifetime caps on insurance will return. Healthcare will be stripped from seniors, low-income individuals, individuals with disabilities, and children that rely on Medicaid.”

“As mayors, we aren’t out of touch with our constituents—like too many members of Congress are,” Walsh concluded. “We know our residents—we know their stories. And we’re going to amplify their stories. We will never stop fighting for affordable, quality, and compassionate health care for all. “

“If enacted, the Senate bill would undo years of progress made in coverage and affordability and destabilize our healthcare system. Mayor Walsh has been a tireless advocate for Boston’s hospitals and we join him in his efforts to defeat this bill.”

“Senate Republicans have proposed a health care bill that will not only severely damage our health care system but will put people’s lives at risk — people I work with everyday as a trauma nurse. It’ll raise health care costs for those most in need, making it less likely they’ll get the care they deserve. I’m scared about what this will do to my patients if it passes.”

“As the bill is currently written, it will decimate behavioral health services at a time when the Commonwealth and the rest of the nation is undergoing an opiate epidemic. This will further cause public health, public safety, and housing issues. It is beyond comprehension how they can do this. We commend Mayor Walsh for his continued efforts to address substance abuse, behavioral health and homeless issues in Boston, and we look forward to working with him to overcome the potential devastating effects of this harmful bill.”

“This proposed bill will deeply hurt those most vulnerable.  They are our neighbors who happen to be poor, ill, and elderly.  They need a government that supports them and lifts them up at a time of greatest need.  We simply can not allow our federal government to make such drastic cuts to the basic medical needs of so many Boston residents and millions across our country.  We must join together, with leaders such as Marty Walsh, to rally the Senate to vote against this bill. Our advocacy is vital to a humane and just society.”

“I am concerned about the upcoming Senate GOP health care bill. I have multiple health issues, which causes me to need special medical care. I battle with Multiple Myeloma, degenerative disc disease, and cancer, among other critical issues. If that bill is passed, where am I going to be able to go to get the medical care that I have right now. With this bill, I am at a loss. There is no way that I will be able to survive. What am I going to do?”

“I am very disappointed by the current Republican health care bill. Right now, all of my prescriptions are covered. I am concerned about what is going to happen with my health insurance. I’m still a cancer patient, although I’m in remission. I have used my health benefits to the fullest, and I do not have income or any savings or assets in a bank to use for health care. I want to see a big change that stops this administration from trying to change Obamacare. I appreciate that Mayor Walsh is standing up for people like me.”

“The health care bill proposed by the Senate Republicans is harmful to the patients I treat as an operating room nurse. It’s concerning that we have leaders that don’t understand how harmful this is to so many Americans. I’m thankful that we have a leader who is advocating on behalf of the people of Boston on matters of health care.”