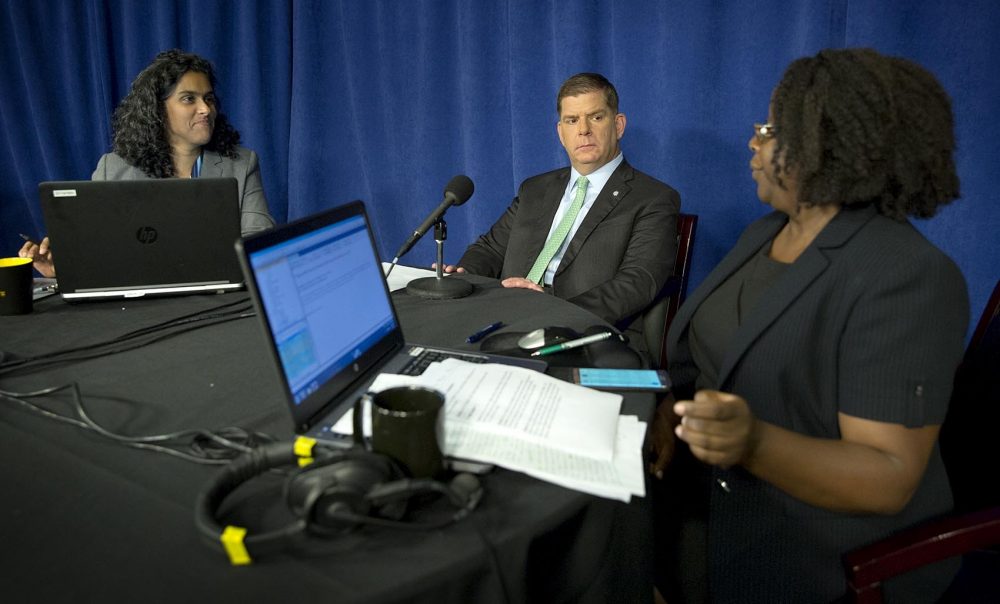 Mayor Martin J. Walsh touted his first-term record on affordable housing and alleviating homelessness Thursday, while vowing to lay out new plans for Boston’s future in an hour-long interview ahead of his reelection campaign.

As part of a pair of live conversations with the mayoral candidates broadcast on WBUR, Walsh gave an overview of his first term in office, from engaging in the fight over an Everett casino on his first day, to the fallout from the failed Boston 2024 Olympic bid and Tuesday’s heartbreaking fatal shooting of a popular hardware store owner in Mission Hill.

Over his 3½ years in office, the mayor said, “I think I’ve become a better listener.”

“It’s not all about telling people what you think is right or wrong, it’s about listening. And if you listen well and your administration listens well, you can do a lot of positive things for the city of Boston,” he said.

Get Fast Forward in your inbox:
Forget yesterday’s news. Get what you need today in this early-morning email.

Walsh took part in the second of two “special conversations” with the city’s leading candidates for mayor before an audience at the University of Massachusetts Boston. The interview was sponsored by the McCormack Graduate School of Policy and Global Studies, WBUR, The Boston Globe, NBC Boston, and Telemundo.

And, in repeated exchanges with WBUR’s “Radio Boston” host Meghna Chakrabarti and Boston Globe City Hall Bureau Chief Meghan E. Irons, Walsh pushed back against recent criticism, much of which has been levied against him by his top challenger, Councilor Tito Jackson, who was interviewed Wednesday.

Walsh appeared to respond to Jackson’s frequent criticism of his record on education, saying that he rarely sees local elected officials at the State House with him lobbying for education funding — although he did not mention Jackson by name.

“If elected officials are concerned about education money, go with me to the State House next time, and advocate on behalf of the kids from Roxbury, Dorchester, Mattapan, Hyde Park, all over the city of Boston,” Walsh said.

The mayor said his proudest accomplishment in his first term was helping the homeless, citing 1100 people who have been taken off the streets and put into housing during his tenure.

And the mayor said his key regret in his first term was taking too long to hire Boston Schools Superintendent Tommy Chang, who, he said, is only now beginning to implement his vision for the system. He said the city has more students graduating from high schools, and more schools are classified as higher-performing than ever before.

On the failed 2024 Olympics bid, Walsh said he inherited that discussion in its late stages. He said he finally backed out — long after public criticism of the plan — once he was asked to sign a document that would “mortgage the city away.”

“I was listening, because at the end of the day we didn’t go forward,” he said.

Walsh said he has focused on increasing affordable housing in the city during a building boom that has seen more than 19,000 new units in the last four years.

Addressing criticism that neighborhoods such as Dorchester and Roxbury are gentrifying and that low- and moderate-income families are being pushed out, Walsh said the city has created programs for first-time homebuyers.

He also said the city has worked in tandem to lure businesses to Boston, and that 66,000 new jobs have been created in the city by companies who have moved here.

When asked about the upcoming federal trial of two City Hall aides who are charged with extortion for allegedly using the weight of City Hall to press a company into hiring union members, Walsh again declined to say whether he had testified before the grand jury that investigated the case. Both aides have pleaded not guilty.

“This is a sad situation, but I’m going to let it play out in court,” he said.

Walsh expressed concern with criticism of the Police Department amid a recent spate of shootings that have shocked the city. While agreeing that he was not satisfied with a 16 percent rate of solved shootings, Walsh said the city is still safe. However, he said there are too many illegal guns on the street, and that witnesses and victims of crimes often refuse to cooperate with authorities.

When asked if he is seeking to redirect blame to the community, and whether the Police Department could do more in its efforts, the mayor said the city is focusing on a street worker program that has adults reaching out to communities, and on creating educational programs.

“We’ve built a relationship,” he said, adding later, “This is not a simple solution.”

Walsh said the city is working on revitalizing neighborhoods and their Main Streets, or neighborhood centers. He pointed to the effort to create a restaurant culture in Mattapan to boost the local economy, saying that a similar effort has proved successful in Roxbury and Dorchester.

Almost on cue, Chakrabarti, of WBUR, read a question from a listener, who invited the mayor to tour Blue Hill Avenue to view vacant storefronts and absentee landlords, and argued that Mattapan “cannot get a coffee shop.”

The mayor said he would welcome the tour, and he broadcast his office phone number to set it up.

“It will not be my first time out there,” he said.

Read the full article in the Boston Globe here.