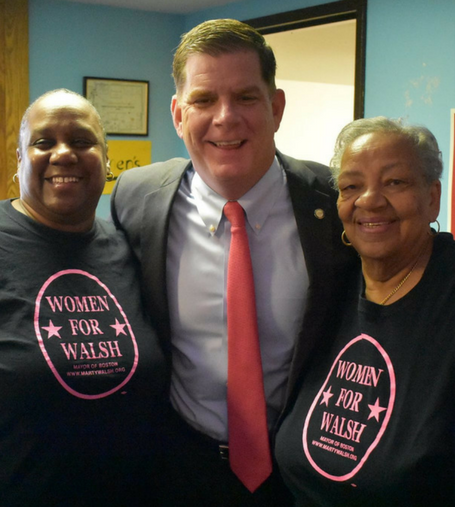 (Boston, MA) Monday, August 7, 2017 – Today, former Lieutenant Governor of Massachusetts and first woman to be elected to statewide office in Massachusetts, Evelyn Murphy, and Mayor Marty Walsh’s partner Lorrie Higgins hosted a Women for Walsh Kick-Off and Canvass. Whether it is creating the Office of Women’s Advancement to advocate for more equal opportunities for women, taking a multi-pronged approach to closing the gender wage gap working with employers and individual women, expanding housing services for sex trafficking survivors or hiring women for key leadership positions, Mayor Walsh had been a strong ally for the women of Boston.

“Mayor Walsh’s advocacy for gender equity has helped launch initiatives that expand the potential of women entrepreneurs all over Boston. I believe his involvement in projects like the Women Entrepreneurs Boston has convened women like me to help create a strong and supportive network.”

“Mayor Walsh’s focus on equity and fairness for women is a significant contribution to working families, who rely on women’s earnings; and it is a signal of his commitment to opportunity for all.”

“As a Latino woman, I am proud of the Mayor’s commitment to bridging the gap of social inequalities.Through his programs and powerful initiatives, Mayor Walsh has encouraged young girls and women to strive to become the better version of themselves.”

“Since his first day in office, Mayor Walsh has made it a priority to support women in the workplace. He has personally brought businesses together to look at their practices, he is committed to closing the wage gap and shedding light on barriers to women’s advancement, and he is passionate about entrepreneurship.  The City’s salary negotiation workshops have such a great a reputation that I sent my own daughters.  It’s actions rather than just words. As an entrepreneur, I am grateful for his leadership and look forward to our continued advocacy together on these issues.”

“Mayor Walsh’s inclusion efforts have fostered a city that not only represents women leaders but also gives them a voice. As a human rights activist, I believe his projects have built on and protected the progress we have made in our communities.”

“The Women’s Advancement department created by Mayor Walsh represents the first step towards having a city where everyone can have access to the same opportunities. As a woman, I strongly support every effort to promote women leadership in our city.”

“Marty Walsh has shown he supports women and issues of equality when it’s popular and when it’s not. He speaks out on issues impacting women when many do and when he is the only one. That is what makes Marty a true women’s ally.”

“Mayor Walsh has been dubbed Boston’s “feminist-in-chief” and I couldn’t agree more. From the campaign trail to the boardroom, Mayor Walsh advocates for policies that level the playing field for all women and girls in Boston.”

“As a woman leader in Boston, I have always felt strong support from Mayor Walsh on issues related to women in the workplace. He appreciates that women are necessary at all levels in an organization. Women ask really good questions and come up with customer-focused solutions, and I believe Mayor Walsh sees that, too. His support has been unwavering, even though I’ve gone to him with both bad news and good news. He knows that National Grid has strong targets for attracting and retaining women in the workplace, and we thankfully exceed those targets.  I look forward to our continued collaboration.”

“Mayor Walsh has shown a commitment to women in the workplace from day one.  He has brought the topic of equality and equal pay to the forefront.  As a working mom contributing to my family’s earnings and my company’s success, it is important to me to receive fair treatment in the workplace. Mayor Walsh has continually shown support for women and female entrepreneurs like myself.”

“I have worked in the non-profit housing field for over 20 years and it is clear to me the most important way to support women and girls is to provide them with decent housing and a just wage. Mayor Walsh’s support of equal pay, expansion of women owned business in city contracting, and free salary negotiation workshops, when combined with the unprecedented amount of low and middle income housing he has created  are real solutions in overcoming income inequality and improving the quality of life for women in Boston.”

“I’m excited to continue supporting Mayor Walsh’s leadership of the City of Boston. In just a few years, Mayor Walsh has certainly made a positive mark leading Boston into its future.  In my neighborhood of Roxbury, I see transformation, opportunity and innovation happening all over the place. Even though there is more work to do to enhance the lives of all Bostonians, I believe the Walsh Administration is off to great start.  I am looking forward to experiencing a stronger Boston under Mayor Walsh’s leadership.”

“As a Boston based business owner, I am impressed with Mayor Walsh’s upgrades in the city and the summer continuance of “Open Newbury,” which gives our business a day to shine!”

“Mayor Walsh understands that women deserve to be treated fairly, and that they contribute so much to the workplace. His leadership on women’s rights issues has given me hope. The mayor is dependable, listens well, and is responsive. Effective advocacy requires much more than a loud voice, but also focused action that brings forth tangible results. His efforts in helping to settle our contract last year and avoiding a strike and that the 3300 Nurses at The Brigham will always be grateful for his leadership in helping us get a fair contract.”

“Mayor Walsh has been a strong advocate for women’s equality in the workplace. He even created the first Office of Women’s Advancement in the country!”

“Mayor Walsh has listened to and respected the voices of women since his days as a state representative. As Boston’s mayor, he has continued that commitment to girls and women throughout this city. He has listened and continues to hear our needs and opinions.  He, in turn, considers and responds to those social conditions and environments that negatively affect Boston women.  Mayor Walsh had been a genuine partner, working to establish viable solutions and actions and to encourage and empower women of this city.”