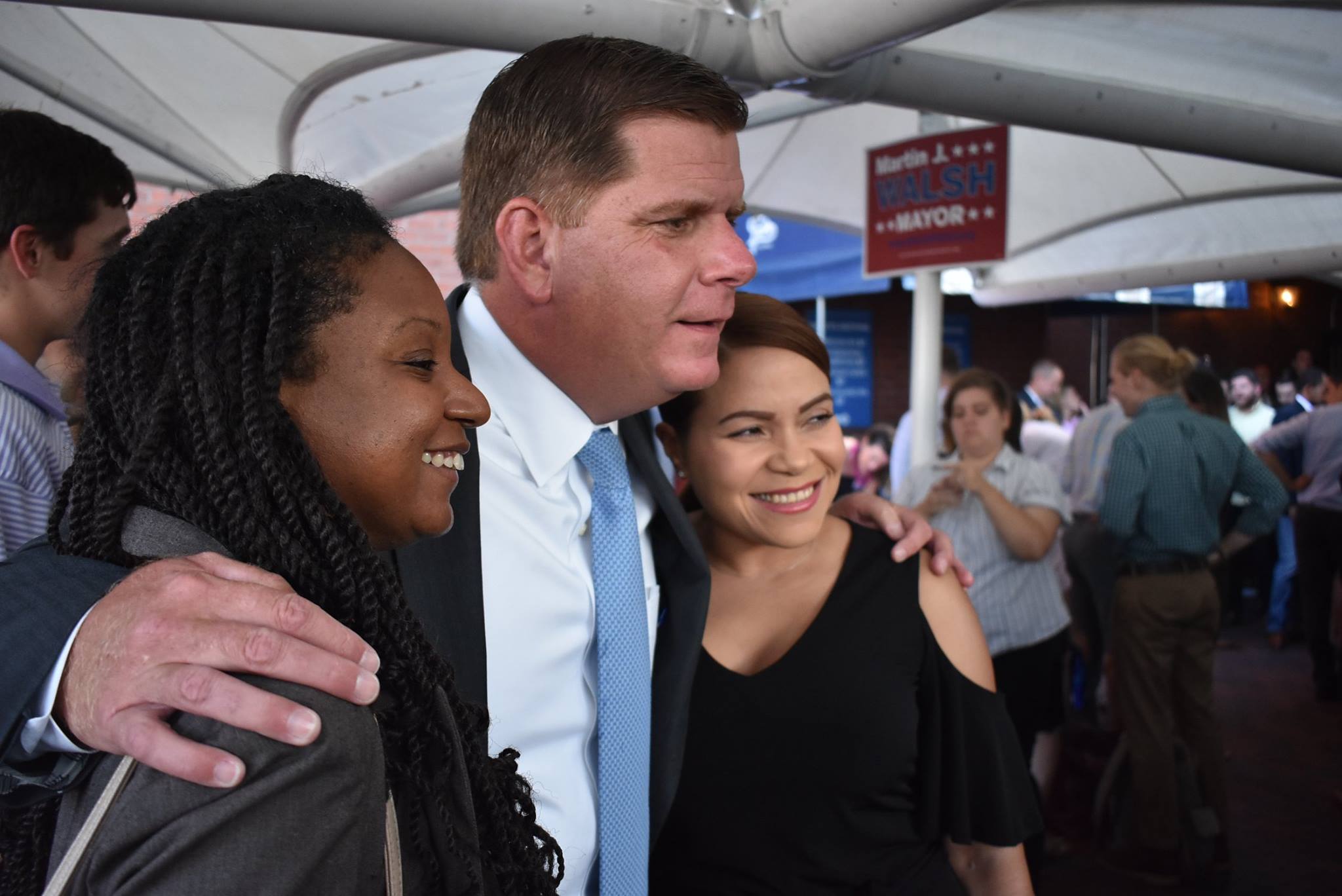 (Boston, MA) Wednesday, August 16, 2017 – Tonight, young professionals from all over Boston gathered at Tia’s on the Waterfront to celebrate Mayor Marty Walsh’s record of building affordable housing, creating access to higher education, and working to create an economy that uplifts everyone.

Since becoming Mayor, Walsh has made it a priority to ensure young people have pathways to success. Leaders from every corner of Boston commended his work:

“Time after time, Mayor Walsh has shown his commitment to all people of Boston, whether it’s filling potholes or supporting local business owners. When it comes to young people in Boston, he has put forward every tool at his disposal to ensure that we have the best startup, entrepreneurial spaces, more affordable housing, and job opportunities that anyone could ask for in a world-class city. I am grateful for his leadership and look forward to the continued work we have ahead.”

“I grew up in Boston and care deeply about its future. It’s with confidence that I can say that Mayor Walsh is the best leader for our city, whether it is in considering strong learning opportunities for our children or backing young people in their pursuits to fight against racism and other injustices. I’ve constantly been reminded of his passion, patience, and dedication, and I look forward to his continued work throughout the neighborhoods.”

“Mayor Walsh has proven his support for young professionals here in the City of Boston. With young people in mind, the Mayor has built a bright future for economic innovation and job sustainability. The Mayor understands that when our young communities thrive, our city thrives. His commitment to this upcoming generation of Bostonians is unquestionable — I am proud to stand with Mayor Walsh.”

“Mayor Walsh has served all of Boston, and its millennial population, admirably. He effectively launched the Roxbury Innovation Center in the heart of the city for young people to make their business dreams become a reality. He’s offering salary negotiation courses, free of charge, to women who are navigating challenging conversations in the workplace. And, he is building more affordable housing, to ensure that all who want to live in Boston can do so. Most important of all, I’ve seen the mayor support the Posse Foundation and several other programs that I believe in, and I can now return that support as he continues his leadership in Boston for the next four years.”

“Immigrant communities have always served as the portrait of Boston; the faces of the next generation of young Bostonians are representative of that. The Mayor understands that the expression of culture, especially by young people, is vital to Boston. Mayor Walsh has advocated for this since day one — he has fought for all of Boston’s communities and I will fight for him.”

“Boston has long been defined by the energy of its people. Its people who give life and soul to a city. As a resident and business owner, I am proud to be a Bostonian under Mayor Marty Walsh’s leadership. Guided by his genuine love and loyalty for the city and the people who call it home, Mayor Walsh continues to demonstrate how effective local government enhances the livability of cities.”

“As someone who had the pleasure of serving in Mayor Walsh’s administration and continues to benefit from his leadership as a resident, I have witnessed firsthand what makes the Mayor such a unique champion for Boston. When it comes to civic engagement, he has shown an uncompromising commitment to reaching out to and learning from all residents. And at a time of political polarization across the country, I take comfort in all that Mayor Walsh is doing to bring people together around a progressive agenda that prioritizes inclusion, opportunity and a voice for all.”

“Mayor Walsh continues to reimagine Boston as an innovative, first-class city and seeks at every turn to capitalize on our city’s strengths. For me, he has been a champion of affordable housing, modern development practices, parks and open spaces, multi-modal transportation, the arts community, involving young professionals more directly in civic engagement, and so much more. Further, when others have tried to regress our country through a ‘divide and conquer’ strategy on social issues, I have appreciated having the mayor of my city – Mayor Walsh – battling on the front lines for equality and basic human decency. I couldn’t be more happy to stand with Mayor Walsh as he seeks another four years of service to the people of Boston.”

“As as a young professional woman in the tech industry, I appreciate how our Mayor and his team have continuously been at the forefront for improving women’s rights in the workplace. The city of Boston attracts some of the best companies to work for, and continues to foster an environment where young professionals want to grow their careers. In addition to my full-time role in tech, I’ve also ran my own successful design and photography freelance company for past 4 years. Because of the great programs like Arts Boston and the Office of Women’s Advancement, Boston has been a wonderful place to grow my brand and network with other small businesses in the art world.”

“Under Mayor Walsh’s leadership, Boston has continued to flourish. The mayor has been a collaborative partner in local government, fighting to make sure every Bostonian has an equal opportunity to succeed and get ahead. Whether you’re a millennial or a senior, the mayor has fought hard for you over the past three years and will continue to fight for you every day. I know Boston is in good hands, and I look forward to the many more years of public service that we have ahead of us.”

“As a small business owner, I have been thoroughly impressed with how much support I continue to receive from the Walsh Administration. I remember the day I handed the mayor my business card and really appreciated how personable and attentive he was. He really cares about the people of Boston, and that has shown in his efforts to launch small business centers across the city.”

“Mayor Walsh is an enormous voice of support for millennials in Boston. SPARK Boston’s civic engagement opportunities encouraged my friends and I to participate and vote on many vital city issues, especially on topics concerning young professionals. I credit the Mayor’s advocacy for millennials as the reason many of my peers and I stayed to work in Boston after graduating college this year.”