In a rout, Walsh secures a 2nd term 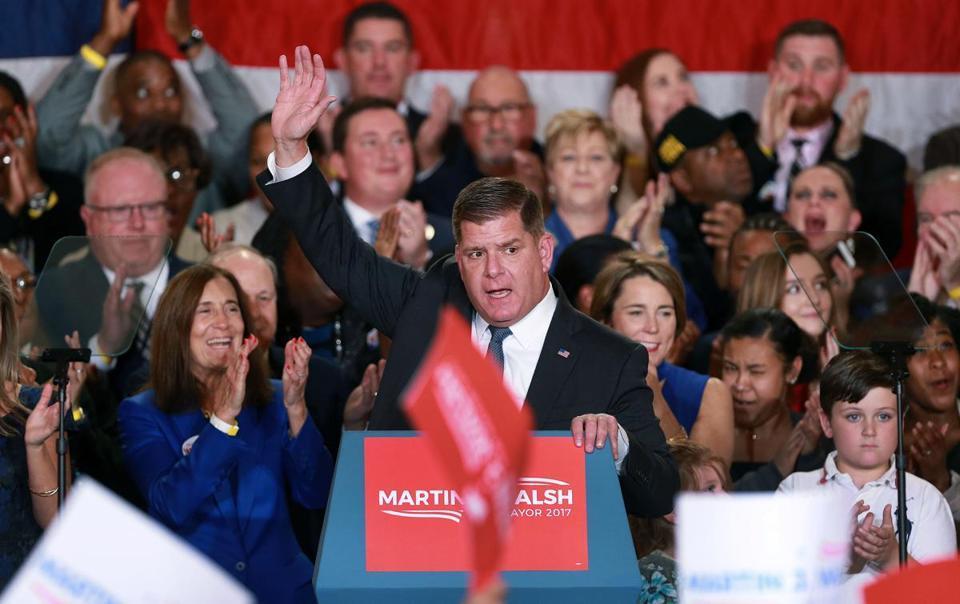 Mayor Martin J. Walsh steamrolled into a second term in office Tuesday night, defeating his challenger, City Councilor Tito Jackson, by more than 30 percentage points in what amounts to a strong endorsement of his first four years as mayor.

Walsh, riding the swell of a buoyant economy, swayed voters with a record of new jobs and less violence in the city, as well as his vocal opposition to President Trump. Walsh asked for four more years to address the city’s widening income inequality and its affordable housing crunch.

Walsh won 66 percent of the votes cast Tuesday, and Jackson had 34 percent, with 100 percent of precincts reporting results.

Walsh came out on the stage Tuesday night to thunderous applause from hundreds of supporters, whose shouts of “Marty,” “Marty” filled the ballroom at the Fairmont Copley Plaza Hotel.

“Tonight, we commit once again to be a city for all of us, to bring opportunity to everyone,” he said. Thanking his supporters, Walsh said, “You were union members, housing advocates, artists, members of the LGBT community . . . you are Boston.”

“Your passion for this city inspires me,” said the mayor, who also expressed thanks to Jackson “for a spirited campaign.”

Jackson, 42, seemed to take defeat in stride, telling supporters that he had wanted to give them the race Boston deserved, and that the city is better because of it. He arrived at his election night headquarters with a smile on his face, receiving the warm reception of his supporters who had hoped that he would have made history as the first black mayor of Boston.

He hugged his mother, and thanked his volunteers and staff. Jackson said he called Walsh 15 minutes earlier to congratulate him.

It was, he said, about the people across the city who felt their rents were soaring, their schools were in trouble, and their neighborhoods were not safe.

Despite the large margin of victory, the campaign failed to capture the city’s excitement over Walsh’s ascension to City Hall four years ago: 27 percent of the city’s 392,000 registered voters cast their ballot, according to election officials, a paltry turnout by historical standards.

By nearly every political measure, the mayoral race was subdued.

There were no television advertisements, low voter interest, and just two debates, neither of which was broadcast on a primetime network.

A former state representative for 16 years, Walsh came out of the gates for his reelection campaign in a comfortable position with $4 million in the bank, a high-powered team of Democratic strategists, and an army of volunteers. He effectively wielded the powers of his incumbency — an imposing advantage in Boston, where no sitting mayor has lost an election in nearly 70 years.

Early on in the race, Walsh gained traction among city voters with his sharp public rebukes of Trump, specifically challenging the president’s policies on immigration and climate change.

In a City Hall press conference, Walsh offered his office as refuge for the city’s undocumented residents. Such vocal challenges to Trump hoisted Walsh into the national spotlight, leaving little room for his opponent to take off.

Jackson, a former ally of Walsh in the 2013 race, is leaving his post as the District 7 councilor, a position he has held since 2011. When he announced his bid in January, he embarked on a fierce campaign to show the two Bostons — one prosperous, another underserved.

He lashed out at the administration for not fully funding city schools, allowing too much luxury housing construction, and prioritizing giant corporations — such as General Electric — over city residents.

Over the course of the campaign, Jackson’s campaign manager eventually departed, fund-raising stalled, and his onetime allies began lining up with Walsh. In the preliminary contest in September, Walsh had an advantage of more than 30 percentage points over Jackson.

Walsh’s Tuesday vote share was expected to be one of the more dominant mayoral wins since his predecessor, Thomas M. Menino, took 76 percent of the vote in his third reelection in 2001.

In his remarks to supporters on Tuesday, Walsh, a 50-year-old son of Irish immigrants from Dorchester, pledged to “expand economic opportunities in every single neighborhood in Boston.”

“Today, I am more determined than ever to make Boston a city where everybody’s dream can come true,” he said. “A city for all of us . . . that’s what the next four years are all about.”

Read the original article in The Boston Globe, here.