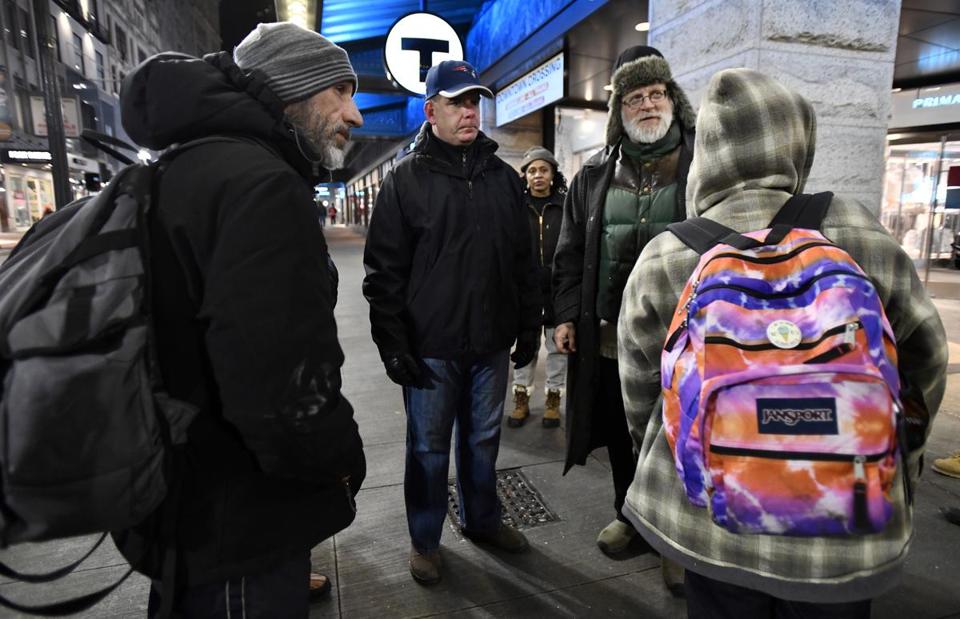 It’s 11 p.m. in Downtown Crossing — a night so cold it punishes every bit of exposed skin. Boston Mayor Marty Walsh leans down to speak to a woman huddled in a corner outside a store.

“Why don’t you come in? It’s too cold tonight.” A few blocks away, she can find shelter at the New England Center and Home for Veterans.

The woman looks at the mayor with large frightened eyes — she says she doesn’t want to lose her freedom. Walsh tries to reassure her: “You’re gonna have your freedom tomorrow — come in tonight.”

The woman declines again, and the mayor instead offers her some blankets.

People ‘Living Out In Conditions Like This All The Time’

This reluctance to accept help presents a common predicament for the 300 or so volunteers who are part of the city’s census of homeless people, which has taken place annually for the last 39 years.

Some people they meet are traumatized by past experiences in shelters. Some are too intoxicated to decide to go inside.

Jim Greene, the city’s point person on homelessness, has been doing the census for more than three decades. Wednesday night’s count, he says, was far and away the coldest count he’s experienced.

That night, as he approaches people, Greene tells those who are reluctant that six people died the night before on the streets of Chicago.

“It’s gonna be 30 below,” he warns one person, adding that volunteers can take the person to a shelter in a van.

Some of the people the team approaches eventually pile into a van parked outside a 7-Eleven. Others get up from where they were staying when approached, pack their bags and move someplace else.

A woman with lips that have turned blue refuses help and ducks into an Orange Line station.

Greene stands outside the 7-Eleven, where several people struggling with homelessness walk in and out.

“We are fully covering the area. That was six or seven people emerging, and the priority was, let’s get people into shelter,” he says. “So far, five out of the seven took a ride to shelter. Somebody’s going to an ATM machine around the corner, and the other gentleman went to an ATM machine up the way. At least those are heated locations, but we’ll have vans out throughout the night checking on people.”

The volunteers fanned out in teams across Boston — from Logan Airport to city parks and shelters — to count the number of people out on the streets.The results of the census are still being processed.

Last year, the city reported 163 people were living without shelter — 23 fewer than the year before.

Those individuals are just part of the more than 6,000 people dealing with homelessness in Boston. They’re either living on the streets, or in shelters and transitional housing. Hundreds are chronically homeless. And, as WBUR previously reported, while the city has made many strides, it was unable to meet its ambitious goal of ending chronic homelessness by the end of last year.

Middlesex County Sheriff Peter Koutoujian, who is also a former state legislator, helped with the census for the first time this year.

“This is one of the coldest nights of the entire year, and it’s not a comfortable night to be out here,” he says. “But you’ve got people who are living out in conditions like this all the time. So if we’re gonna come out, tonight’s the night.”

Koutoujian says with warm houses and fully-stocked fridges, it’s easy to forget about people who live on the streets.

But being part of the homeless census is a good way to remember.