Marty Walsh touts middle-class efforts in State of the City 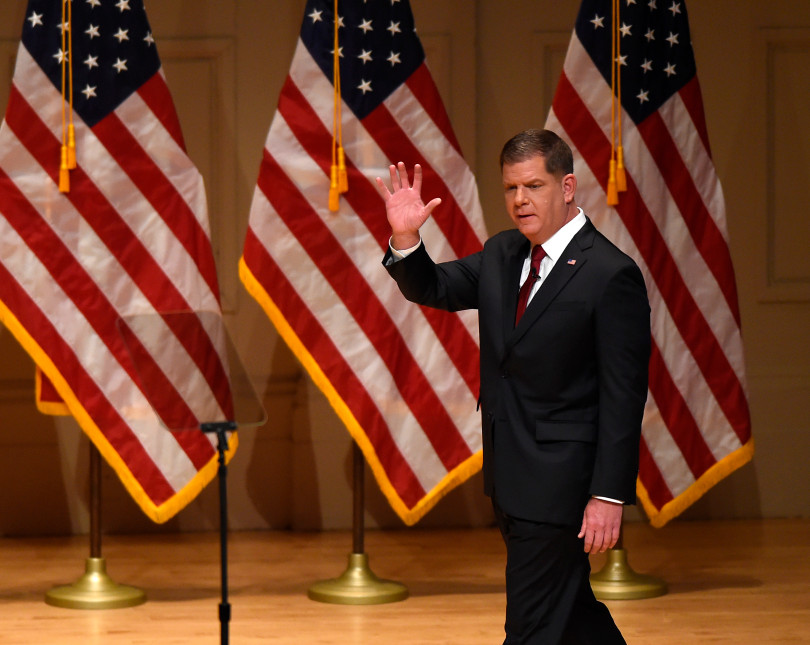 At his fifth State of the City address, Mayor Martin J. Walsh touted Boston’s middle class and slammed the Trump White House, telling residents “the state of our city is strong, but I’m concerned about the state of our union.”

“What happens in Washington, we feel on the streets of Boston,” Walsh said during the Tuesday night address. “But here’s what matters more: what we do in Boston can change this country. We’ve done it before, and we’ll do it again, because in this time of uncertainty and division, Boston offers a way forward.”

Walsh cited Boston’s unemployment rate of 2.4 percent, the lowest ever recorded, and a study by German relocation company Movinga that rated Boston as the best city in the world to find a job. Hours before his State of the City address, Walsh announced he was launching a mobile economic development center aimed at expanding the city’s job growth, specifically for women and minorities.

City Council President Andrea Campbell responded to the address in agreement with Walsh’s assertion that Boston is leading the way in many areas, but pushed back on his praises of its equity.

“We need to make sure our city’s growth and prosperity is felt across every neighborhood,” Campbell said in a statement. “There are inequities here in Boston, many of which show up in my district, which is predominantly a district of color.”

On the topic of the city’s housing crisis, an emotional issue that’s plagued the city with residents arguing that they’re being driven out, Walsh pleaded to his residents that the City needs more help.

Walsh also criticized the White House for turning “its back on climate change,” an issue he committed millions of dollars to earlier this year in hopes of protecting the city’s harbor from rising tides and floods in the coming years.

On education, Walsh addressed his administration’s controversial decision to close two schools in West Roxbury, by alluding to how old buildings were when he took office.

“Two-thirds of our schools were built before World War II,” he said. “Many lack basic amenities like gyms and cafeterias that students in the suburbs enjoy. That’s an injustice. … We are opening doors to new schools, new libraries, new homes and new jobs.”

Walsh also touted his efforts to end chronic homelessness and the $10 million his administration has raised for “supportive housing.” He also recapped his efforts to rebuild the Long Island Bridge and provide a recovery campus for people suffering with addiction.