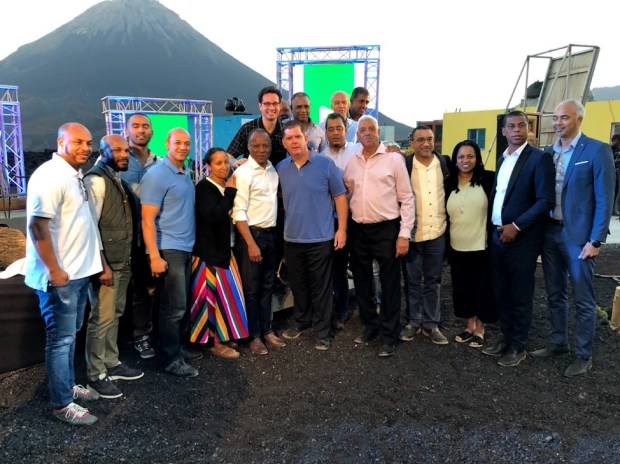 By MARTIN J. WALSH |Published by the Boston Herald

On a recent Monday morning, I sat down with a class of third-graders. These young students were very shy, until I asked them what they wanted to be when they grow up. Suddenly everyone had something to say: A doctor! A nurse! A pilot! They lit up when thinking about the possibilities in front of them. These kids reminded me of BPS students I see on a regular basis. But we weren’t in Boston. I was leading a trade mission in Praia, our Sister City, and the capital of Cape Verde.

One student told me that he wanted to be a police officer. “Like Nilton!” I said, introducing him to Nilton Ramos, a Boston police officer. Nilton grew up on the island of Fogo in Cape Verde, until his family moved to Boston when he was 14. He went on to serve three tours in the U.S. Marines, and has been an officer with the Boston police for the last 12 years. He’s currently pursuing his masters in criminal justice.

“Yes, like Nilton!” the boy said. Nilton’s story is typical of many Cape Verdean families. Almost everyone in Cape Verde has connections in the United States. They often make the difficult choice to leave home. And, more often than not, they look to Boston.

Today, Greater Boston is home to the largest Cape Verdean population in the United States — close to 40,000 people. They play an important role in our economy, our culture and my administration. This trade mission allowed us to strengthen those connections.

We covered a lot of ground. We visited the village of Cha das Caldeiras, which was devastated by a volcanic eruption in 2014. The resilience of this community is incredible. In four years they have literally emerged from the ashes, and their wine industry is thriving again.

Back on the island of Santiago, we went to a public market that reminded me of Haymarket in downtown Boston. While shopping I ran into two retired Boston firefighters. Everywhere we went, we met people with a connection to Boston.

That was especially true in Praia, which is home to a brand new innovation center. It was founded by a Cape Verdean entrepreneur who spent many years in Boston. He was inspired by Boston’s status as the No. 1 city in the U.S. for startups, and he is hoping to see Praia play that role in West Africa.

This culture of innovation has become our calling card in Boston. It’s about making sure everyone has access to emerging industries. The person I have entrusted to lead that work is John Barros, my friend and our chief of economic development, who is himself an immigrant from Cape Verde. At the end of our trip, Prime Minister Ulisses Correia e Silva presented John with the National Medal of Merit. It’s one of the highest honors bestowed to any Cape Verdean. I’ll never forget the look on John’s face. He was full of gratitude and pride, for both of the countries he calls home.

As the child of Irish immigrants myself, I know how powerful these connections can be on both sides of the Atlantic. And I see a lot of commonalities between Cape Verde and Ireland. Both island nations fought for their independence and won. Both have seen war, hunger and political upheaval. Like the Irish, Cape Verdean immigrants work incredibly hard when they arrive in Boston. And like the Irish, Boston would not be what it is without them. We need to maintain and celebrate these connections; with Cape Verde, and all the places Bostonians have roots, like the Dominican Republic, Haiti, Trinidad and Tobago, and Brazil. Not only are they important to our economy, but they’re also a big part of who we are.

So what now? The Mayor of Praia and I have reaffirmed our Sister City agreement. Cape Verdean businesses are continuing to invest in Boston’s neighborhoods. Tourism between our countries is growing rapidly. Our schools are developing academic exchanges. And Boston’s police officers, doctors and nurses, including the Cape Verdean Nurses Association, are working on how they can support their counterparts in Cape Verde. This helps to meet an important need, especially in the wake of catastrophes like the 2014 eruption.

When I think about why this work matters, I think about those third-graders in Praia. There is a good chance that someday, at least a few of them will be Bostonians. Maybe that young boy will realize his dream and become a police officer, whether it’s with the BPD, or helping first responders in Praia prepare for natural disasters. Whatever their path, we want them, as well as every child in Boston, to inherit a better world — one full of opportunity, where they can follow their dreams, and where they see themselves as members of a global community.

Read the original OpEd in the Boston Herald, here.