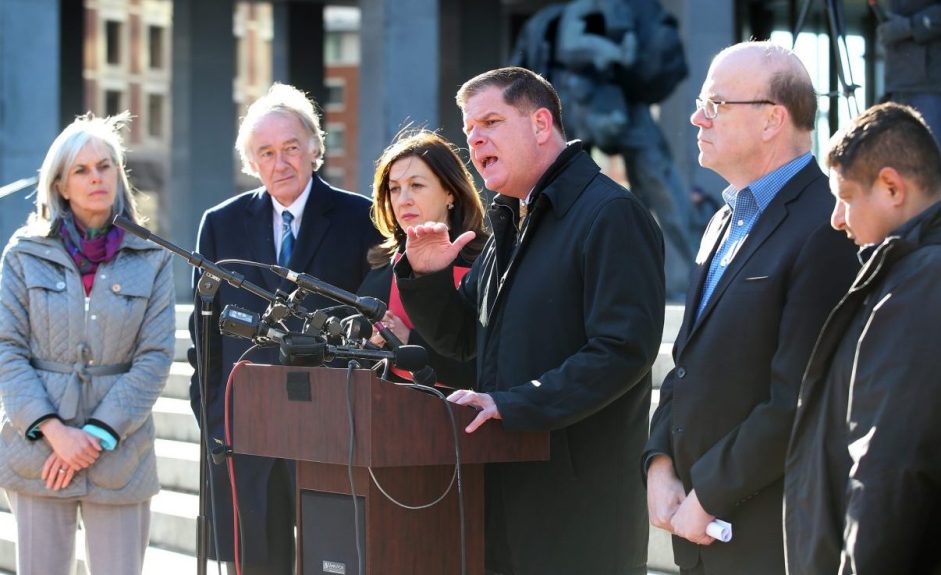 Pols and activist groups gathered Monday at City Hall to advocate for the Dream and Promise Act to pass in Congress, which would protect so-called Dreamers and other illegal immigrants with temporary protected status and provide a path to citizenship.

“This act would mean so much for me and my family and it would help more than just me,” said Karina Ham, a Lesley University student who was brought to the United States when she was 4 years old and said the Deferred Action for Childhood Arrivals program has provided a valuable opportunity or her.

“The clock is ticking,” said MIRA (Massachusetts Immigration and Refugee Advocacy) Coalition Executive Director Eva A. Millona. “This is an urgent crisis.”

Speakers at the rally slammed President Trump, saying he is using the illegal immigrants as a bargaining tool.

“We care deeply about the immigrant community and we want to make it clear that we have your back and we will fight for you to give you a path to citizenship,” said U.S. Rep. James McGovern. “Our message to Trump is that we are sick and tired of the hate, the bigotry and the anti-immigration ideals … you betray our values and you diminish our country.”

“We need to treat immigrants like people instead of problems,” Mayor Martin Walsh said. “The Dream and Promise act offers solutions, not a scapegoat and doesn’t villainize and criminalize our immigrants.”

In Massachusetts alone, there more than 12,000 people with temporary protective status, 5,900 active DACA beneficiaries, and 13,000 Dreamers who were eligible for DACA but were not enrolled when the program was ended, according to the coalition. Walsh said that 28 percent of Boston is comprised of immigrants.

“In the commonwealth we are not about building walls, but building bridges,” said U.S. Rep. Katherine Clark. “These people we are fighting for are what make America great, it is good for us all and for our communities.”

Several men stood on the sidelines of the rally shouting “do it legally” and “our forefathers fought for our country.” They stopped shouting after police went to speak to them.

“We play by the rules, we pay taxes, it’s not fair,” said Jose Uria, a member of the Massachusetts TPS (Temporary Protected Status) Committee, over the counterprotesters’ shouts. “I have been in the U.S. for 22 years, I am part of the community and the country, how are we going to allow this administration to do this to us?”

Read the original story in the Boston Herald, here.