Infrastructure and climate dominate Walsh remarks to Dorchester Board of Trade 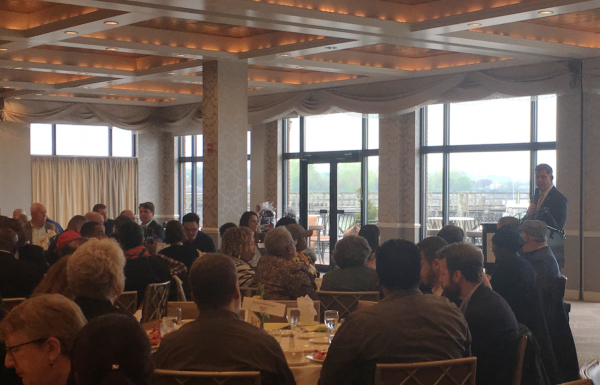 Mayor Martin Walsh, fresh off a trip to the nation’s capital with Gov. Charlie Baker, had infrastructure and climate resilience on his mind as he addressed the Dorchester Board of Trade on Friday afternoon.

The mayor’s annual speech before the board of trade brought out a few hundred business leaders, civic heads, and other elected officials out to Venezia, at the point of Port Norfolk, on a dreary National Bike to Work Day.

“We went down to D.C. yesterday to talk about transportation and infrastructure,” Walsh said. “The environment in D.C., it’s, I probably would say toxic is too strong of a word, but it’s toxic.”

Two of the biggest complaints he hears about are about traffic and housing pressures, he said. Walsh encouraged those present to talk to their federal representatives on behalf of the $1.5 trillion to $2 trillion infrastructure bill being mulled on Capitol Hill. The delegation is “on board” generally, Walsh said, but should be reminded of the “importance of talking to colleagues” across the aisle to push it forward.

Walsh said he felt a “real respect between Democrats and Republicans” in the Senate, and both sides told him and Baker that they hoped to get the bill out of Congress by the end of the year. The mayor and governor talked with the Massachusetts delegation most of the day on Thursday about the bill.

“The fact that Governor Baker as Republican and myself as a Democrat went down to Washington, there was a little bit of a buzz going on in different offices in congress,” Walsh said, “that a Republican governor and Democratic mayor are advocating together for the need for money… We talked about the importance of getting a bill done and putting differences aside. And that’s what I think we need to see more of in our cities and down in Washington obviously, but also it’s so important for what’s at stake. What’s at stake here is rebuilding the middle class.”

On top of highlighting capital investments in Dorchester, Walsh called out the ongoing climate resiliency issues along the coastline. In Port Norfolk, debate around the best kind of development is fine, but resilience must be a part of the conversation, Walsh said.

“We’ve talked a lot about quality of life issues in the neighborhood, but the Dorchester waterfront is also part of our community,” Walsh said. “We’re seeing roads flood more often than before. We’re seeing flooding happening all over the city of Boston. We’re seeing flooding on Morrissey Boulevard for many years, it’s not new, but as we think about and expect another 40 inches or so [of sea level rise] by 2070, it’s gonna get much worse.”

Years ago, the mayor recalled, the road would be partially shut down maybe once a month. Now, it’s “every time it rains sometimes. That’s not due to the DCR, that’s due to sea level rise.”

The Department of Conservation and Recreation’s ongoing redesign of Morrissey did come up while on the D.C. trip, the mayor said. He noted the work of state Rep. Dan Hunt and state Sen. Nick Collins to keep the plan alive.

“When I was down in Washington yesterday I was talking to the governor about Morrissey Boulevard, he brought it up to me,” Walsh said. ”And I said there’s a plan there and we have to figure out how do we make sure we fund this plan that works for everybody and how we move this plan forward. And then we started talking about Kosciuszko Circle, and we started talking about opportunities at Victory Road Park and other places we could really make investments in and move our city forward, and the governor was open to the idea but we have to continue to stay out there.”

The city is keeping resilience at the forefront when it looks at development along the harbor, Walsh said, but not with “a big barrier around the city, around the harbor.” Its natural coastline and many open areas like Moakley Park are an opportunity to build a protective and welcoming resilient border with the sea, Walsh said.

Climate Ready Dorchester, the next phase of the city’s resiliency plan, will start going into public meetings this summer – “community meetings focused around what kind of waterfront residents want to see, and see how we can make sure in vulnerable areas of Dorchester that the businesses and people are protected. We’re going to look at the entire Dorchester coastline, and we’re gonna look at it as a resilient asset. We’re not gonna look at it as a challenge.”

Around the former Bayside Exposition Center site, Walsh said the city is working with UMass Boston, the Corcoran-Jennison Companies, and the Boston Teachers Union to look at incorporating resilience into that side of the peninsula.

Walsh concluded his remarks with a plea to civic leaders to consider development proposals in good faith. Planning is moving along in Glover’s Corner, which includes the mixed-use Dot Block proposal in its midst.

He understands concerns about density and massing and housing, Walsh said, but feels that the revamped Dot Block proposal is a win for the neighborhood in affordable units and jobs.

“You can get to a good project by sitting down,” Walsh said.

The new design has more green space, “offers opportunities for people who make a middle class wage to live in a middle class apartment, and on the other side there’s going to be the opportunity to create more low income units of housing now. It can be a win-win for the community. So I ask you as you think about new development, civic leaders, it’s easy to jump on the bandwagon of “Oh my god, everything’s getting developed.” That’s a good problem to have, because people want to be in Dorchester. That wasn’t the case 30 years ago.”

Read the original article from the Dorchester Reporter, here.