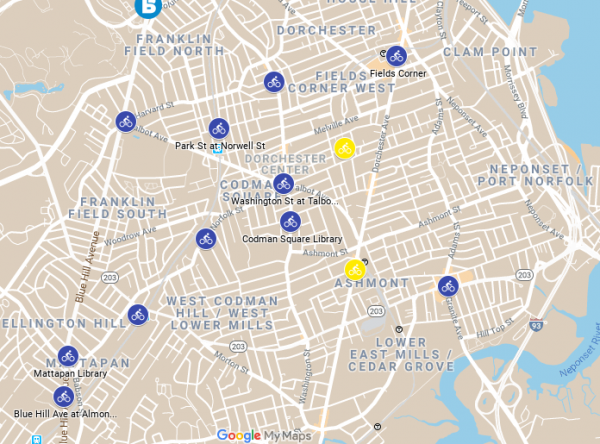 Mayor Martin Walsh announced yesterday another expansion of Bluebikes, the city’s bike share system, with new funds that will open an additional 50 stations and add 540 more bikes across Boston and surrounding communities in 2019. According to a press release from the mayor’s office, these expansion efforts will use $1 million in the mayor’s FY20 budget to open additional Bluebike stations in “southern Dorchester” and “eastern Mattapan.”

As with last year’s Bluebike expansion project, which saw stations open in places like Fields Corner, Codman Square, and Mattapan Square, this year’s efforts will rely on community feedback to identify the best locations for new bicycle infrastructure. Two stations proposed to open at the Ashmont and Shawmut T stops are currently pending MBTA permits, per the city’s website. A community meeting process that will take place over the next month will determine the future of any additional stations in the Dorchester and Mattapan neighborhoods.

Thus far, the city has identified 11 potential locations in Dorchester and Mattapan, including additional stations along Dorchester Avenue at Roseland Street and King Street, along Washington Street at Fuller Street and Walsh Playground, at the Lower Mills Branch Library, multiple locations along the Neponset Trail, and at the corner of River Street and Central Avenue.

The Boston Transportation Department will host a public meeting for the Dorchester community on Wednesday, June 12 at 6:30 p.m. at All Saints Church in Ashmont. Residents can also provide feedback about future and existing Bluebike stations through online surveys here, or by contacting bikeshare@boston.gov or 617-635-1378.

Read the original article in the Dorchester Reporter, here.