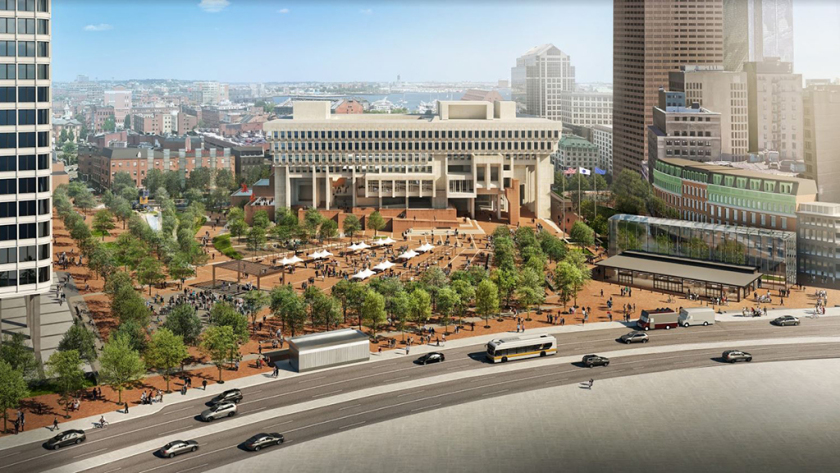 BOSTON (CBS) – Mayor Marty Walsh wants to create a “People’s Plaza” outside Boston’s City Hall, and the public can now see what is envisioned for the $70 million renovation.

The city released eight renderings on Tuesday of the planned makeover that will change the way residents view and use the public space. The plaza is one of Boston’s largest civic areas and since it opened in 1968 it has hosted events ranging from sports celebrations to political rallies.

“This renovation will turn our seven-acre space into a welcoming, accessible space for all, featuring new civic spaces for events to areas for families to enjoy together,” Walsh said in a statement. “Creating a new People’s Plaza will help us achieve our goals of making one of Boston’s most-used public spaces better for all residents.”

The renovation plans include a new civic engagement building for community meetings, an open play area and a water wall-lined promenade. In the winter months, there are plans for an ice skating rink in the middle of the plaza.

“We’re going to create a promenade from Congress Street up around the plaza to make it fully accessible,” said Patrick Brophy, Mayor Walsh’s Chief of Operations. “Back in 1969 when they designed this building there was no American with Disabilities Act.

Brophy is spearheading the multi-phase project that will also include green spaces a playground and up to 3,000 spaces for people to sit.

The top of the Hanover Promenade at City Hall (Image credit: City of Boston)

Sustainability is an emphasis in the new design, with plans for the planting of 100 more trees, new LED lights, and permeable surfaces to soak up stormwater during severe weather.

Some Boston residents are happy to see a change coming to the plaza.

“I think it’s great there’s a lot of history here on this plaza and sometimes for us older guys change comes hard, but it’s time for a change,” said Kent Gunther.

A public community meeting for a design presentation and discussion about the renovations is scheduled for Wednesday at 6 p.m. in City Hall. Check out the new renderings here.