Life on the T in Boston 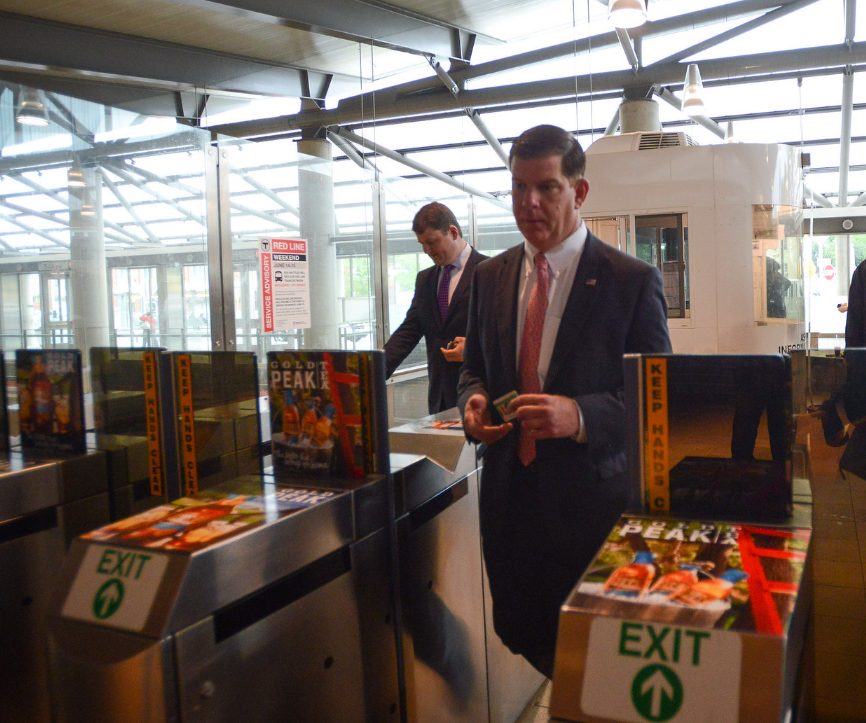 By Marty Walsh
Today I responded to a survey from the Boston Globe that asked about public transit. I wanted to share my feedback with all of you, as well as some background on how I get around Boston.

I’ve been riding the MBTA since the 1970s — my mom took us everywhere on it. Growing up, I took the T every day to high school, or wherever else I needed to go. I grew up near JFK/UMass on the Red Line in Dorchester, and I knew my routes — Park Street to the Green Line for high school near Copley Square — like the back of my hand. My dad kept an old car on the street, but him and my mom always took the T to work. We were an MBTA family.

For the first 20 years of my life, I didn’t have an alternative. If the train broke down (yes, it broke down then too), we would sit for however long it took to get back up and running, with no air conditioning. Many of our residents today also don’t have an alternative for times when the Red Line takes an extra 30 minutes they didn’t expect. When there’s no train in sight or a full bus passes by not once but twice, I think of the mother late to pick up her child from daycare or the student late to take an important test.

So it’s never lost on me how fortunate I am as Mayor to have access to alternative transportation, especially when we don’t currently have reliable public transit to move us where we need to go, when we need to get there. The BPD’s Dignitary Protection Unit takes their responsibilities very seriously, and have driven Boston’s mayors for decades. More often than not, I’m joined by staff going to the same event or meeting as me, or we will pick up someone on the way from Dorchester to City Hall. That’s why I checked “carpool” from the available options — it’s the closest to describing what we do.

Every day, I speak to my team about their experiences on public transit, on bikes, on foot, and in cars so I can learn more about how transportation shapes quality of life in our city.

During the creation of Go Boston 2030, our vision for a bold transportation future for the city, the team spent time experiencing other commutes. If they normally rode a bike, they took the train. If they normally walked, they got in a car, and so on. This, plus the 5,000 questions and comments collected from the public, are what formed our goals and targets for our transportation future.

On Friday, I joined our new Transit Team from the Boston Transportation Department at Twin Donuts in Allston to learn more about their work and to see the new permanent, dedicated bus & bike lane on Brighton Avenue first-hand. This first-ever Transit Team was established in February. Their focus is on installing bus lanes on the busiest corridors and working to advance regional rail projects that benefit residents and employees in Boston.

Bus lanes have been used throughout Boston to improve bus frequency and reliability. This section of Brighton Avenue between Cambridge Street and Commonwealth Avenue serves two of the system’s highest ridership routes, the 57/57A and 66. This bus and bike lane is expected to save as much as 40% of the travel time between Union Square and Packards Corner at rush hour. The new bus lane advances Go Boston 2030 goals of providing consistent, on-time service, ensuring predictable commute times, and prioritizing the movement of people over cars.We’ve seen success in Roslindale with a dedicated bus lane on Washington Street connecting Roslindale Square with the Forest Hills Orange Line station.

Travel times along this corridor have improved by 20–25% during peak times and in the direction that has seen the most delays in the past. In less than six months after implementation, the bus lane added 160 daily riders to the corridor.

The effects of the Red Line derailment continue to paralyze our city and region. Still, it’s uncertain when and if service will be fully restored. Fares went up two weeks ago, even though I and many others voiced the strong opinion that it’s unacceptable to ask riders to pay more for less service.

A world-class city deserves a modern and exceptional transit system, or at least one that is fully operational, reliable, and efficient. That isn’t too much to ask.

With the right investments, Boston and the region can experience the full power of public transit — to connect our city and protect our environment. But we need investment, implementation, and improvement on a faster timeline than we have now.

I took the T every day to high school and I graduated in 1986. Compare Boston from 1986 to today — it’s unrecognizable. Compare the MBTA from 1986 to today? It’s largely the same, except it has an additional 30 years of wear and tear.

Public transit stitches together our people and our neighborhoods. Its purpose is to provide a clean, convenient way to get around our city and our region — to jobs, to schools, to wherever we need to go. It should help make people’s lives easier, not worse.

Our residents and workers are suffering under the ongoing failures of the MBTA. We deserve better and Boston deserves to have a role in the future of the MBTA. Right now we don’t even have a seat on the Board. We’ve been waiting too long for the train and for a better system, and we can’t wait any longer.