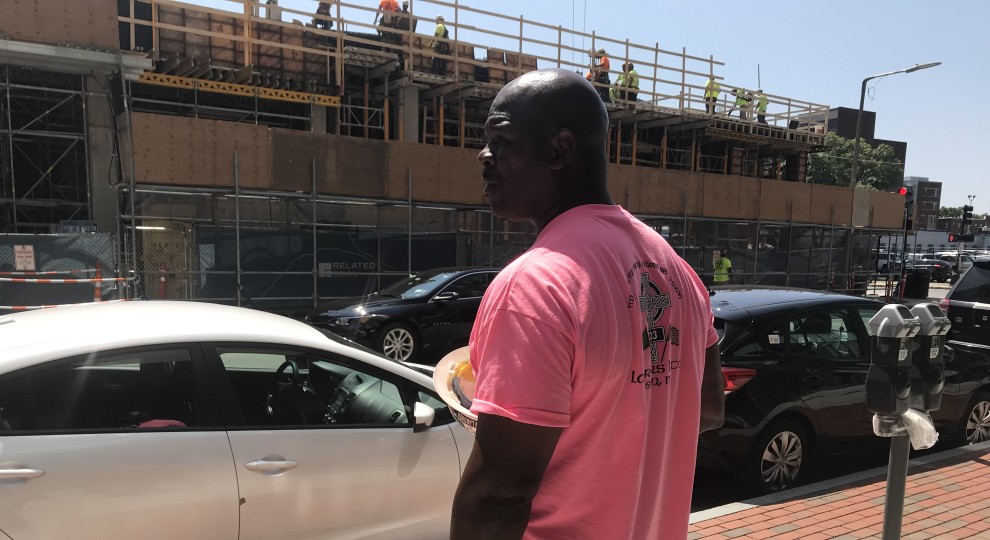 By Joe Mathieu and Brendan Deady

On a humid night in the middle of July, Boston Police Commissioner William Gross stepped up to a lectern and put on his hat, just for the effect of taking it off to tip it toward the crowd. It’s a small gesture of levity, as a buzz of optimism and subtle uncertainty coursed through the room.

Fifteen men and one woman sat before him in a row of folding chairs at the Local 17 sheet metal workers union hall in Lower Mills. Their loved ones sat behind them. Toddlers darted between folding tables, writhing in their parents’ arms.

“People have a vision for you when you don’t even see it,” Gross said. “But now you see what’s before you. Now you see people have your back. Now you see you have a great opportunity.”

Gross was addressing the latest graduating class of Operation Exit, an initiative launched by Boston Mayor Marty Walsh’s office six years ago. It puts men and women who have been involved in the court system through a three-week introductory course with the building and trades unions. Before acceptance, each student has to receive a referral and pass a police screening to confirm they’re not under any active investigations.

The class tours jobs sites and witnesses the day-to-day requirements of working in one of the city’s 19 trade unions, such as sheet metal work, brick-laying and carpentry. The teachers try to model the three weeks to reflect the circumstances of the students’ potential new careers: get to class by 6:45 a.m., no cellphones and no drugs. Then, after graduation, union representatives help them navigate the apprenticeship process.

Operation Exit has graduated 104 students since its inception, and according to the city’s Office of Workforce Development, there’s a roughly 90 percent success rate for job retention. The mayor’s office is hoping to expand the size and frequency of the program.

Walsh said Operation Exit was born out of the conversations he had when he was first elected and learned about some of the contributing factors that led people to fall into a pattern of violence and crime. One of his major takeaways was that opportunities for work started to dwindle once someone had a criminal history, especially for people of color.

“The intent behind this is that their past doesn’t follow them,” Walsh said. “They have an opportunity to … learn from their past and build a strong future.”

One of those students is Jerardy, who asked WGBH News not to use his last name because of his past. The thin 21-year-old with tightly woven braids speaks out of one side of his mouth. There’s a gray puckered scar on the left side of his face where a bullet shattered his jaw last year. Just beneath his chin runs a long, swooping scar.

“I decided I needed to make a change when I had gotten shot in the face and woke up in the hospital and seeing my mother cry. [I] decided to not only do it for me but also for my daughter,” Jerardy said.

That was 10 months ago. His girlfriend was three months pregnant at the time. Now he plans to enter the sheet metal union and is hoping that with the good benefits and pay, he can create a future for his daughter where she won’t experience any trauma similar to his own.

But it’s up to the students to stay on track after graduation, and there’s always the risk of old habits derailing new opportunities. Some students never make it to graduation. Students said the network of support from their classmates helps them maintain their new routines.

On graduation night, Boston Police Commissioner William Gross gave a shout-out to Darius Hines standing in the back of the room. At 6’ 4” with a linebacker’s stature and a relatable past to the students in the class, Hines is a recruiter, mentor and motivational speaker for the program. He is a natural story-teller with the ability to easily distribute digestible pieces of hard-learned wisdom. For every class, he sponsors a student and uses his speeches as a testimony to some of the success that can come with sticking it through. He said he helps them adjust to their new schedules and stays in touch with the people he has sponsored as a way to pay it for forward.

A week after the graduation, Hines stood outside of his job site at 370 Harrison Ave., wiping the sweat from his shaved head with the American flag bandanna he keeps under his hard hat.

He looked down Traveler Street at the rows of new buildings and the other construction sites in the distance, which are quickly replacing the old brick and empty lots of his childhood.

“This ain’t the South End I grew up in,” Hines said.

The change is especially dramatic for him, because for nearly 17 years, he was locked in federal prison.

Hines grew up in Roxbury and got involved in gang life as a teenager, he said. He has the scars to show it. Hines has been shot in the hand and stabbed twice. In 1991, at the age of 19, he admitted to being involved in a shootout the year before that accidentally injured an 11-year-old in Dorchester; Hines and another man were targeting the boy’s cousin. He also admitted to shooting two men in the leg following an argument during a separate incident, according to court documents and media reports at the time.

He served time in MCI-Cedar Junction state prison in Walpole. Less than a year after his release, he was arrested on charges of felony trafficking and distribution of crack cocaine. In 1998, he pleaded guilty and was sent to a federal penitentiary. When he was released, in his early 40s, he had spent half of his life in prison without ever holding a legitimate job.

Statistically, he faced another potential chapter of failure. A 2016 study from the Justice Department found that within eight years, half of federal offenders were rearrested and a quarter ended up back in a federal penitentiary.

But Hines was determined.

“I knew coming out, I would never go back in. … There’s no freedom in being in jail,” Hines said. “You just gotta be tired of being tired.”

His motivation to remain free and his ability to convey the lessons he learned from his mistakes helped him find work as a youth counselor at the Dorchester Youth Collaborative.

After a chance meeting with Dan Mulhern, the mayor’s director of public safety, he agreed to speak in front of the first class at Operation Exit. Through that connection, he met with Walsh’s older cousin, who helped him get into the laborer’s union Local 223.

Now Hines is a labor steward, owns a home, is married and has 19-month-old twin daughters.

“They took a chance on me and I’m doing well,” he said. “The Boston I came from, when I went away, it was nothing like this Boston. It was, ‘F*** you, you’re going to jail, nothing to talk about.'”

From the moment Hines got involved with Operation Exit, he’s been constantly on call. In the middle of our interview for this story, he stopped mid-sentence to answer a call from a woman he sponsored in the latest class — the daughter of one of the men Hines was arrested with when he got picked up on federal trafficking charges.

His post-incarceration life is riddled with these full-circle reconnections. Gross used to be a street cop working the beat of Hines’ neighborhood during the peak of his criminality. Now they shake hands at city-run events.

Gerard Bailey, now a deputy superintendent and part of Operation Exit, was there the day Hines was arrested on federal charges. They used to cross paths frequently when Bailey worked gang investigations in Hines’ neighborhood. Now, Hines calls him to screen whoever he sponsors for the program, and he considers him a friend.

“If you grew up in this city, you should have a part in building it, too,” Hines said. “I drive around now and can point out to that building and this building and say, ‘I helped build that.’ It gives you a sense of pride in where you live.”

Walsh said one of the key reasons to the program’s success is proving to the students that people in their communities want to see them grow.