How a Brighton school went from ‘needs improvement’ to state recognition 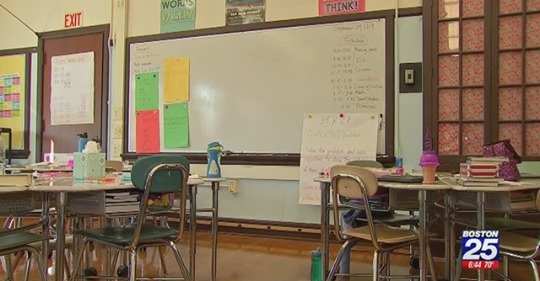 BOSTON – The State Department of Elementary and Secondary Education released its annual report tracking student achievement this week. In Boston, the state’s largest district, roughly a third of the schools have some work to do, but one school is getting top marks for turning things around.

When Principal Mona Walker Ford started at Brighton’s Winship School, it had one of the lowest rankings in the state in achievement targets like English, math, and science — just 8% in 2016. This year, they ranked 59th and designated a School of Recognition.

This year’s report showed 33% of Boston Public Schools need improvement and 67% are on target or excelling.

The Winship School is just one of two schools out of 67 in the entire state to receive the School of Recognition designation.

“We have to get kids up and doing and learning and moving,” said Walker Ford.

They have introduced intensive sciences classes earlier and have allowed teachers to take the time to connect.

“The teachers here are really good. They make a lot of things easy to learn,” said fifth-grader Naychi Win.

Maxine Rosa — or “Miss Max” — has been at the Winship for 36 years and uses the school’s outdoor classroom to teach English language learners.

“Our instruction focus now is making student-centered learning activities for the students,” said Rosa. “So it’s really allowing some more time, some more space to tailor their lesson plans to the students. That’s exactly what we do and it really works well.”

Plus, in a state where more than 80% of all teachers are white, they have one of the most diverse staffs in the city.

Walker Ford is a native of Boston and her own other was a Boston Public Schools teacher for 30 years.

“That’s all part of my identity and that’s part of who I am and so I want kids to be able to see themselves,” she said.

Fifth-grader Bethlehem sums it up best, “We pay attention to the teachers. They do their job. We do our job and you know, we learn.”