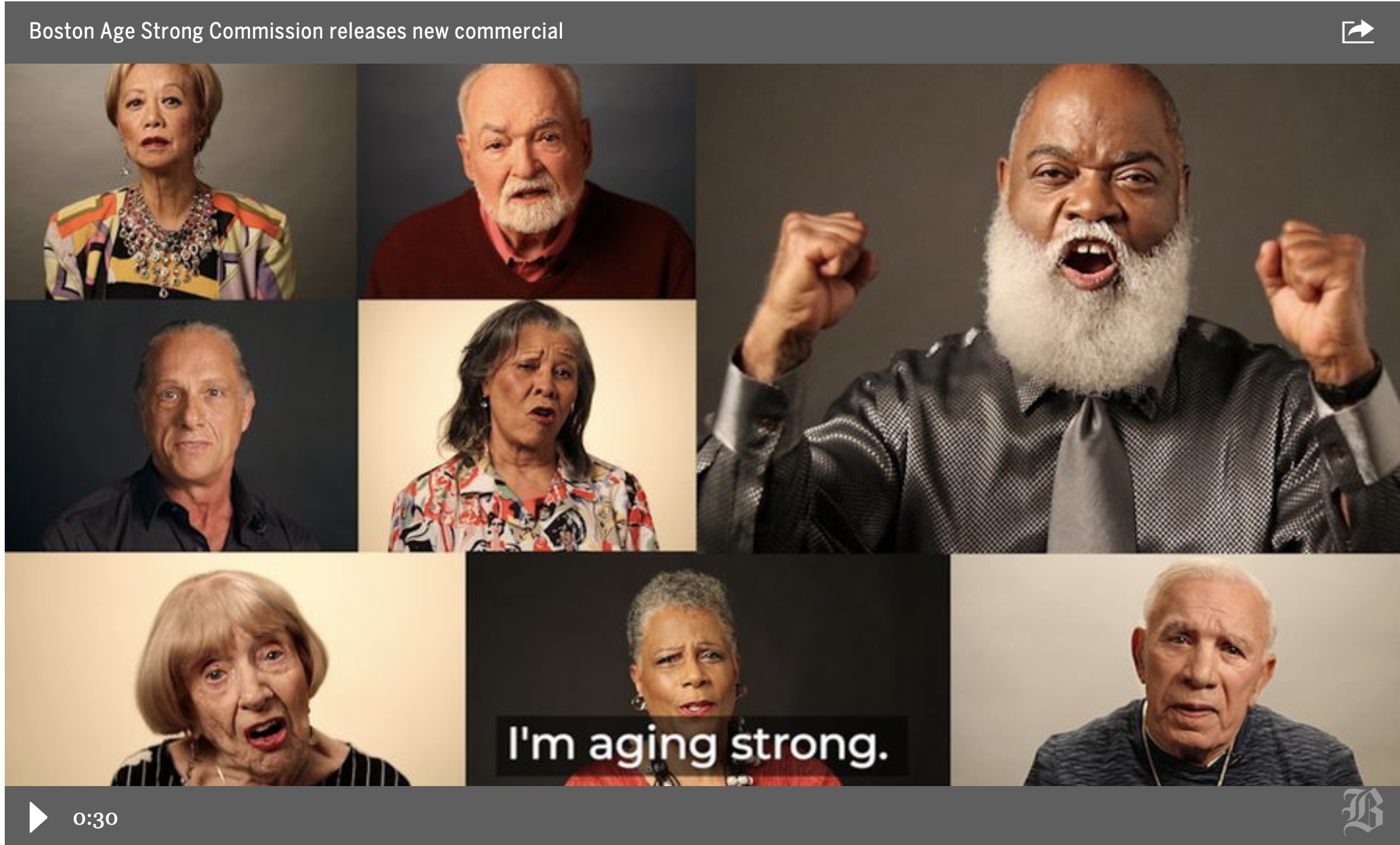 In increasingly woke Boston, some call it the last socially acceptable bias.

But now city officials are challenging ageism in a multimedia campaign that seeks topromote positive views on aging and to excise offensive adjectives — cranky, senile, frumpy, fragile — about older people.

Organizers say the campaign, which will be unveiled Tuesday, is the first by a major US city. Conceived by Boston’s recently rebranded Age Strong Commission, formerly the Commission on Affairs of the Elderly, it grew out of a series of 30 “listening sessions” the agency hosted across the city in half a dozen languages with residents over age 50.

“They felt people didn’t understand them,” said Age Strong Commissioner Emily Shea, “and they weren’t taken seriously because they had long resumes, or gray hair.”

The campaign features images of older residents with messages that aim to dispel widely held stereotypes — with the hashtag #AgeStrong.

One of the ads’ subjects, Charlestown resident Irene Morey, 103, is captured with bright eyes and a big smile, refuting the all-caps descriptor SENILE.

“You think I’m out of touch?” the text quotes her as saying. “Whatevah! I use a smartphone, paint every day, play Sudoku on my tablet, and spend time with my boyfriend. I am a lot of things, and senile isn’t one of them.”

The campaign, which cost the commission $13,000 to produce in-house,includes a short video running on local access television stations, as well as digital banners, posters, and billboards that will be displayed, starting next week, at City Hall and neighborhood libraries, city bus stops, and Logan International Airport, and on MBTA subway and trolley cars.

In an interview, Morey, a retired nurse who said she takes plenty of vitamins but no prescription medicines, spoke of her philosophy of life and longevity.

Public officials and business leaders across the country are recognizing ageism as a problem, but few organizations are taking it on in such an explicit way, said Nora Moreno Cargie, president of the Tufts Health Plan Foundation in Watertown, one of those who got an advance peek at the multimedia campaign.

“Boston is cutting-edge on this issue,” Moreno Cargie said. “This issue is being talked about around the country, but Boston is taking it to the next level. They’re showing the people who break the stereotypes. It’s understanding that, as diverse as we are as a society, older people are also diverse.”

Moreno Cargie said she hopes Boston’s campaign can be imitated by other cities. “With a small budget and a big vision, this is a model that can be taken nationally,” she said.

In an era when activists call out bias against women, racial minorities, and people in the LGBT community, Shea, the Age Strong commissioner, said ageism is “one of the last -isms” that tends to go unchallenged.

That may be changing, as the commission rolls out a broader set of “age-friendly” action plans aimed at forging an alliance between baby boomers battling age discrimination in the workplace and retired folks struggling with health, housing, and accessibility.

“We’re a new generation of older people, and I feel really honored to be part of it,” said Smiler Haynes, 86, of Grove Hall, one of the “models” in Boston’s anti-ageism campaign. “I really feel that I’m just getting started. I’ve got 10 more good years, or even more.”

At a meeting with reporters in City Hall on Monday, some of the models for the ads described everyday instances of implicit prejudice, sometimes from well-meaning younger people.

“I have friends who say, ‘You look great, but why don’t you dye your hair?’” said Sandra Harris, 68, a South End resident with salt-and-pepper hair who is president of AARP Massachusetts. “I tell them I don’t want to dye my hair. This is who I am.”

Rob Quinn, 59, an LGBT activist who also lives in the South End, said some at his YMCA assume he’s too old for intense workouts, like those at the Zumba classes he attends.

“Just because you’re of a certain age, people assume you’re there for water aerobics,” he said.

Cassandra Baptista, communications director for the Age Strong Commission, said she and her colleagues had been eager to tackle ageist attitudes for several years but felt they couldn’t move forward until the agency jettisoned its “elderly” moniker early this year.

“We wanted to start a conversation about ageism, but we had to change our name first,” Baptista conceded. “We knew our old name was holding us back.”

Baptista said one of the goals of the city’s anti-ageism campaign is to focus on what older residents are doing now — raising families, running businesses, fighting for change in society — rather than on what they’d done in the past.

Sharply dressed Judy Yee, 70, a South End resident who describes herself as a “fashionista,” continues to serve as a claims investigator for Boston’s parking office.

Morey continues to work daily on her art projects, including sculptures and Picasso-style “meditation drawings.”

“This can be a time of fulfillment, a time of freedom,” Baptista said. “People say they can be exactly who they want to be.”