My Message on Labor Day 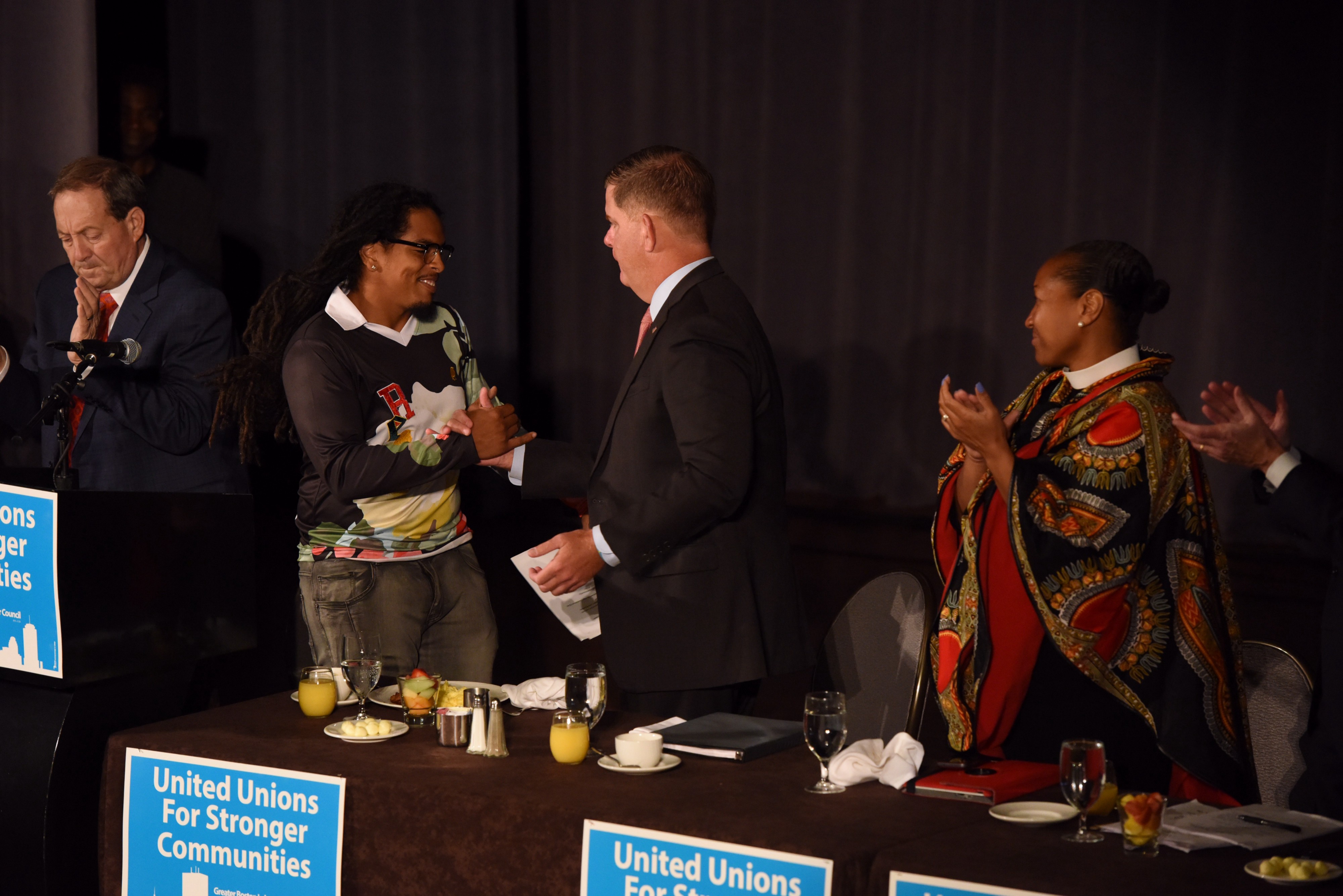 Thank you, Yohan. I’m proud of you and all the Operation Exit graduates. Since we created this program in our Office of Public Safety, in partnership with the Building Trades, we have graduated 104 men and women into good union careers. Some of them are here, let’s welcome them into the labor movement on Labor Day.

Boston’s Operation Exit Provides Pipeline From Courtrooms To New Careers
On a humid night in the middle of July, Boston Police Commissioner William Gross stepped up to a lectern and put on his…
www.wgbh.org

My father had a sixth-grade education. Nobody else would have given him a chance to use his work ethic, his smarts, his heart for helping people — nobody else except the labor movement. Like Yohan and like many of you, I had my struggles as well. The labor movement gave me a second chance.

Since 2014 in Boston, we have created over 70 million square feet of new development, worth over $29 billion. We have added more than 120,000 jobs to Boston’s economy, in health care, in education, in nonprofits, in biotech, in hotels, in construction, and more. More people are working in our city than at any time in history.

And we are making sure every single person in our city gets a full, fair shot at these opportunities — women and men, gay and straight, black and white, Latino and Asian, immigrant and native. Boston is a city for all of us and opportunity must be for everyone. That’s how we succeed and that’s how we lead, no matter what’s happening in Washington.

There’s no national housing policy. None. But with our plan in Boston, we’ve built 30,000 new homes, and we are the number one city in America for providing subsidized housing to families in need. In addition, we’ve created permanent homes for nearly 2,000 formerly homeless individuals, including more than 1,000 military veterans. We ended chronic veteran homelessness in Boston.

America’s still waiting for the infrastructure investment that was promised again and again. In Boston, we’re not waiting. We’re investing a billion dollars in our schools. We’re investing over $100 million in public libraries. We’re dedicating ten percent of our capital budget to a Resilient Harbor Plan that protects us from flooding.

There’s no federal education plan, but we have one in Boston. We’re funding universal pre-kindergarten for every four-year-old and college or career savings accounts for every five-year-old. School starts this week, and we have a dynamic new Superintendent in Brenda Cassellius. I want to thank our teachers, bus drivers and monitors, food service workers and secretaries — all the dedicated, hard-working people who are critical to our students’ success.

Nationally, there’s no action on gun control. Despite mass shootings, despite street crime, and despite overwhelming popular support, across parties, for a simple, common-sense reform like background checks, the GOP Senate won’t even bring a bill to the floor.

In Massachusetts we passed the strongest gun laws, and we have the lowest gun violence in the country. In Boston, we invested in our youth and our community. Our police officers took more than 500 guns off the streets, this year alone, and we cut Boston’s crime rate by 25%.

Our young people should grow up free from the fear of gun violence – The Boston Globe
Hadiya’s tragic death is part of a nationwide epidemic. Every day, gun violence claims the lives of 100 Americans, many…
www.bostonglobe.com

On issue after issue, we have proved what works, and what you can do when you work together. So how did we get to a place, in our country, where housing investments are negotiable, infrastructure is optional, tax breaks go only to the wealthy, the federal minimum wage is frozen in time, and organized labor is demonized — yet the NRA is welcomed into the halls of Congress to block anything and everything that could make Americans safer?

How did we get here? Let me share a quote with you: “The challenge we must meet together — that we can only meet together — is the biggest challenge facing this nation: it’s restoring the American Dream and rebuilding the middle class.” I said those words to this breakfast five years ago, the year I took office. This goes back to before the current president.

What happened? Locally, when we worked together, we achieved great things. But nationally, Democrats and labor took our eye off the ball. We did not carry a positive message. We did not speak to everyone. In 2016, Trump filled that void with false promises and wedge issues. We lost Pennsylvania, Michigan, Wisconsin, and the White House. We lost people locally as well, people in this room. We have not convinced enough people what’s at stake and we have not convinced enough leaders what needs to be done.

We have a president who’s written off half the country. We can’t afford to do the same and, if we do, we will pay a steep price for it. We need everyone to understand what that price is — presidential candidates, local officials, and labor as well.

It’s time to wake up. This administration is turning back the clock on everything — women’s rights, LGBT rights, immigrant rights, and workers’ rights. It’s encouraging racism and inciting violence. This is our American family we’re talking about. It’s all of us. And it’s our future together as a country.

If anyone here thinks they are safe, think again. This administration takes children away from their parents and puts them in cages — for the crime of seeking a better life. Where do you think they’ll stop? With the judges who want to tear down the labor rights our grandparents fought for? Janus was just the start. The regulators who killed overtime for low-income workers and let Walmart fire people for organizing? The trade wars that devastate truck drivers and farmers? The government shutdown that bankrupted federal employees and contractors? Their new plan is to deregulate apprenticeships — the hard-earned credential that your careers and paychecks are built on — turned into nothing more than a piece of paper. Who will be left to speak up for you, when your rights are gone?

The labor movement and the Democrats are working people’s last hope. So we have to start acting like it. There’s too much at stake for business as usual. We need to change the conversation and remember who we are. We are not a collection of special interests. We are a movement of hope — the hope that’s in the heart of every working family: the hope of safety for their children, the hope of buying a first home, the hope of ending racism and getting a fair shot, the hope of recovery from addiction, the hope that creates opportunity, feeds families, ends inequality, brings pride back into communities, and rebuilds the middle class.

We have exactly 14 months until election day, 2020–14 months to get our country back on track. It won’t be easy. One of the lessons I learned when I became mayor is that it’s much easier to say things than it is to do things. Promises and platitudes are not action and execution.

We’ve been leading in Boston, and we’ll keep leading. But I need you, all of you, to help: by asking more of yourselves, more of the movement, and more from your elected officials. For unions, a check and an endorsement aren’t enough. It’s going to take educating members about what’s at stake.

For elected officials, it takes more than just snappy tweets to make change. It takes judgment, and balance, and the hard work of bringing people together. It takes the courage to tell people the truth and not just what they want to hear. It takes real allies who understand that solidarity is not just rhetoric for Labor Day. Working people are under attack every day.

It’s time for the courage to stand up for what’s right. It’s time for the trust to stand together in the fight. Remember who we are and what we’re fighting for. Listen to voices like Yohan and Operation Exit, telling us what’s at stake. It’s the future of our country.