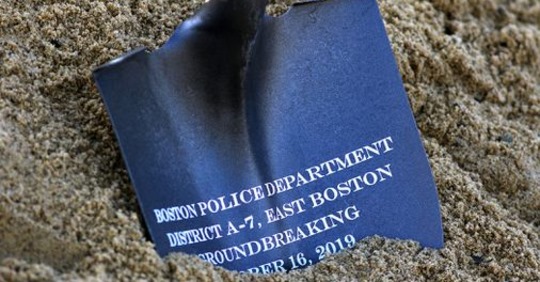 Mayor Martin J. Walsh, state politicians, and Boston police hosted a groundbreaking ceremony for the new A-7 police station, which is set to open in 2021 at 338 East Eagle St.

“It’s the first complete new station that we’re building in Boston in a decade. B-2 in Dudley Square opened in 2011,” Walsh said. “When I first got elected mayor, I thought we were going to be breaking ground. I was all excited. And here we are six years later, breaking ground.”

Boston officials also broke ground Sept. 16 on a new $23.5 million fire station in Roxbury. The city is funding other projects, including a new EMS station at Logan Airport and a pool in East Boston.

Get Metro Headlines in your inboxThe 10 top local news stories from metro Boston and around New England delivered daily.

“There were some rooms on the second floor the police can’t even use. The ceiling is crumbling, the building is falling apart,” state Representative Adrian Madaro said.

The 27,000-square-foot police station will feature a public room for the community to host events, the mayor’s office said in a statement. The three-story building will have a LEED Silver certification.

The station was designed by Leers Weinzapfel Associates and J&J Contractors, Inc., the mayor’s office said. The building will display a piece of public art that it will obtain through one of the city’s art initiatives.

“All of you right here, from our great elected officials to the health center, command staff, the people of East Boston, this is our station. This is a breaking of the ground for a new family station,” Boston Police Commissioner William Gross said. “East Boston deserves it. We’ve been waiting a long time.”

“This new building will allow our police officers to do their jobs more effectively, and continue their incredible work and relationships with the East Boston community,” Gross said in the statement.

A few dozen protesters outside the groundbreaking ceremony called on Walsh to stop Eversource Energy from building a substation behind the new police station, said Heather O’Brien, a community planner at Harborkeepers, an environmental organization.