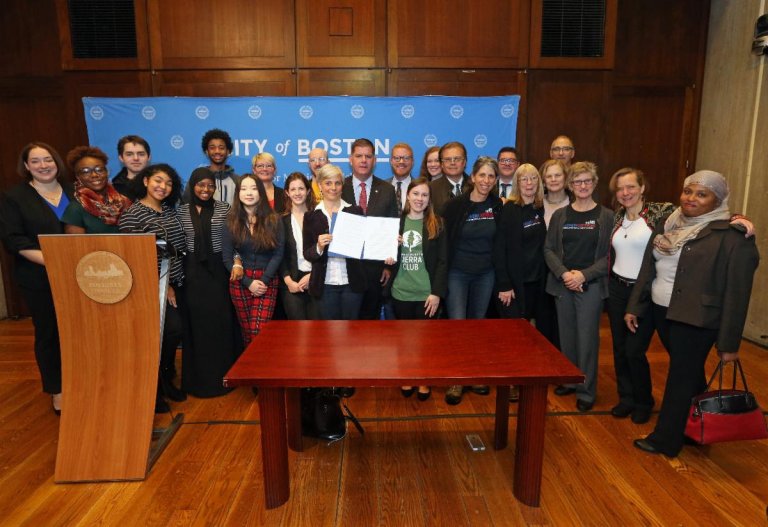 BOSTON – Wednesday, December 11, 2019 – Mayor Martin J. Walsh today signed an executive order requiring all new municipal buildings to target a Zero Net Carbon standard. Under the executive order, new municipal building construction will have to be low-energy and fossil fuel-free, while meeting its annual energy needs from a mix of on- and off-site renewable energy assets. This action aims to accelerate the City’s leadership in climate action, keeping Boston on track to meet the goals outlined in the 2019 Climate Action Plan, as well as the Paris Agreement.
“Climate change is the defining challenge of our time,” said Mayor Walsh. “As a coastal city, Boston is at the frontlines of this global crisis, and we understand the urgency. While national action is at a standstill, cities like Boston are leading with plans, solutions and results. The 2019 update to our Climate Action Plan is our roadmap to carbon neutrality, and this executive order is the first in a series of steps we’ll be taking to implement this critical plan.”
“I’m so incredibly proud of the Mayor and his team for leading the way through this executive order,” said Councilor Matt O’Malley. “To our young people, thank you for what you do. You’re making our planet a better place, not only on issues of climate change. We have an opportunity now as a City to not only lead the way, but also combat the negative effects of climate change.”
Mayor Walsh is committed to making Boston one of the world’s leading cities pursuing climate action. Boston is driving down emissions and preparing for sea level rise, extreme temperatures and storms through the Carbon Free Boston and Climate Ready Boston initiatives. At the same time, Boston continues to be ranked the most energy-efficient city in the country, according to the American Council for an Energy-Efficient Economy’s 2019 City Clean Energy Scorecard. The ranking highlights programs such as Renew Boston Trust and Boston’s long-standing Building Energy Reporting and Disclosure Ordinance (BERDO).
Citywide, buildings account for nearly 70 percent of Boston’s carbon emissions, therefore Mayor Walsh is requiring higher standards of eliminating buildings’ carbon emissions to reach the City’s carbon neutral goals. BERDO requires building owners in the City to understand their energy use and see the path forward to increasing energy efficiency. In order to meet the City’s goal of carbon neutrality, all buildings — new and existing — must meet a zero carbon standard by 2050. As outlined in the 2019 Climate Action Plan, the City is pursuing a required performance standard and zoning code updates to support building decarbonization citywide.
“I applaud Mayor Walsh’s commitment to reduce emissions from municipal buildings as part of Boston’s Climate Action Plan update,” said Richard A. Dimino, President & CEO of A Better City. “I also look forward to working collaboratively with the City to develop smart strategies to reduce emissions across the buildings and transportation sectors that ensure Boston continues to grow and thrive in the face of climate challenges”.
In Boston, city-owned buildings account for nearly three-quarters of carbon emissions from local municipal operations according to the City’s greenhouse gas inventory. Subsequently, Boston has worked to reduce its buildings’ footprints: emissions from local municipal operations in fiscal year 2017 were already 41 percent less than 2005 levels, exceeding Mayor Walsh’s 2020 goal. Renew Boston Trust, a program which currently implements energy-saving projects and retrofits in existing City-owned buildings, contributes to Boston’s continued progress. Projects are already underway at 14 municipal buildings across Boston, including libraries, community centers, and police and fire stations.
New municipal projects will be designed to be highly energy efficient and optimize onsite renewable energy while prioritizing fossil fuel-free combustion. Mechanical systems will be designed to accommodate anticipated changing climate conditions, including sea level rise, more intense storms, and increased precipitation to ensure resilience.
“As the voice of students across the Boston Public Schools, we have been calling for net-zero schools,” said Katio Barbosa, an eleventh-grader at the Burke High School. “It’s great to see the Mayor hear our call and take real action to reduce carbon emissions in our city. On behalf of Boston Student Advisory Council and all Boston Public School students, we thank you for making Boston take the lead on the fight against global warming.”
“The Boston Climate Action Network is delighted that Mayor Walsh is taking this critical step to lead by example and cut emissions from City buildings,” said Andrew Bean of the BCAN, “We look forward to supporting the full implementation of the 2019 climate action plan strategies.”
Mayor Walsh previously created a climate-ready vision to enhance Boston’s waterfront. Announced in 2018, Resilient Boston Harbor shows how a network of accessible open spaces and climate-ready buildings and infrastructure will increase resilience to major flooding events, while also increasing access and open space area along the waterfront. Like all the City’s current planning, it prepares the City for 40 inches of sea-level rise. Furthering the Mayor’s vision are a series of detailed neighborhood plans for coastal resilience. Coastal resilience plans are complete for parts of East Boston and Charlestown, for South Boston, and are underway for Downtown, the North End, and Dorchester.
In addition, earlier this year, Mayor Walsh released the Zero Waste Boston plan, which will divert at least 80 percent of the City’s waste from landfills and municipal solid waste combustors by 2035. The City has begun implementing strategies, including expanding education and outreach campaigns around recycling in partnership with institutions like the New England Aquarium, and is currently developing curbside composting and textile recycling programs for residents.
In his fiscal year 2020 budget, Mayor Walsh nearly tripled the City’s investment in Greenovate Boston to expand outreach to Boston residents and support community-level climate action. Since the investment, Greenovate launched a climate action guide for Boston residents to reduce their carbon footprint at home, at work, in school and in the city. Beginning this month, the City will host a series of trainings and dialogues throughout the community on climate change.
To learn about the City’s Climate Action Plan and read the full executive order, please visit: https://www.boston.gov/departments/environment