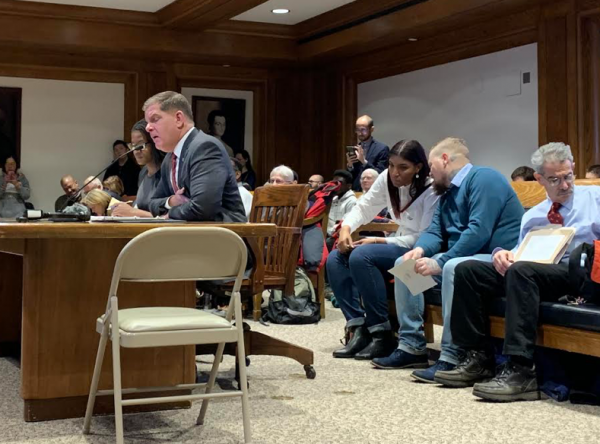 Mayor Martin Walsh made the case Tuesday for city-sponsored legislation that he says will help Boston leverage a boom-time development market to help seed affordable housing starts and workforce training programs. State House News Service reports that after hearing testimony, the Joint Committee on housing voted to advance the legislation.

The home rule petition, unanimously passed by the City Council and signed by Walsh, is accompanied by Bill H. 4115, “An Act authorizing the city of Boston to limit buildings according to their use or construction to specified districts.” The bill is sponsored by Rep. Kevin Honan (D-Brighton), chair of the Committee on Housing.

“We’re at a crisis moment here, and the legislation that I’m about to testify on has no impact at all on the borders outside of Boston,” said Walsh. “it’s strictly a bill to [provide] just the City of Boston with the authority to use the linkage and (Inclusionary Development program) IDP to be able to continue creating affordable housing and protecting what we have in our city.”

Walsh said that the lack of housing “continues to be the biggest economic challenge facing the people of Boston.”

“Not only do we need more housing to keep up with the demand — we need more housing at price points that families can afford,” said Walsh. “This bill will allow us to leverage Boston’s strong growth to create more opportunities for housing and job training for our residents. I respectfully ask the legislature to recommend passage of this important bill.”

The Legislature must approve the bill in order for Boston to have the ability to amend the Linkage formula and memorialize Boston’s Inclusionary Development Policy (IDP) into the Zoning Code. Under the current law, the Boston Planning & Development Agency (BPDA) is only allowed to adjust Linkage every three years based on the Consumer Price Index (CPI). Currently, commercial developments over 100,000 square feet pay $10.81 per square foot for housing and jobs linkage.

Since 2014, Boston invested $43 million in affordable housing based on linkage payments, according to Walsh’s office.

Under current rules, the city can only alter that rate every three years based on inflation, but the legislation would allow for more frequent changes, which could lead to additional revenue for housing programs and job training.

The legislation would also formalize inclusionary development requirements, which the city has deployed without legislative approval for almost two decades. By updating the zoning code, Edwards said, Boston will ensure that affordable housing is required in all projects and not only when developers seek zoning variances, public funding or public land — a challenge that Boston alone faces.

Boston’s Linkage program receives funding from payments made by large-scale commercial real estate development to be used for affordable housing and workforce training. Linkage funds are allocated through the Neighborhood Housing Trust (NHT) and the Mayor’s Office of Workforce Development.

Councillor Lydia Edwards joined the Mayor in testifying to support the legislature.

“This bill passed unanimously by the City Council and was signed by Mayor Walsh. It modernizes Boston’s authority to regulate residential and commercial development,” said Edwards.

“This is more than just a housing bill, this legislation advances civil rights and fair housing while making our local development processes more effective, more accountable, and ultimately more affordable for our residents,” she added.

Senator Nick Collins also testified in support of the bill, commending the council and Walsh for their leadership.

“I don’t think a more important piece of legislation will pass this session. This would allow us to capture more value from development that’s happening in the Boston area. The cost of real estate has grown so significantly, so this really allows up to benefit more significantly, leveraging resources that we don’t have currently,” said Senator Collins.

Several residents of Boston affordable housing spoke in favor of the change during the hearing, sharing stories of how city programs helped them through challenging circumstances and how expanded linkage and zoning changes would make that aid more available to others.

“This is a tool that Boston needs,” said Shameeka Moreno, a Roxbury resident and Coalition of Affordable Housing member.

Another housing-related home rule petition will soon head to the Legislature. On Monday, Walsh signed a proposal that would allow Boston to impose a local tax of up to 2 percent on real estate transfers over $2 million.

That matter is not yet before the Housing Committee, but Honan — a Brighton resident who personally supports the measure — said it would likely be met with more pushback than the petition that sailed through last Tuesday.

“That will be challenging, but we think, again, it’s necessary to take action such as that to provide affordable housing,” Honan said.

Read the original story from the Dorchester Reporter, here.