In a time of social isolation, Mayor Walsh sends a message to those in recovery 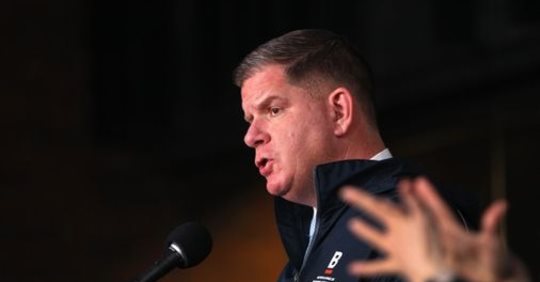 With the coronavirus continuing to shut down public life as we’ve known it, Mayor Martin J. Walsh has been gradually testing out a new message.

It’s directed at those who — like Walsh, and for that matter, me — are in recovery, and it comes up in every one of his public briefings: one day at a time.

“I’m sending a message,” Walsh said. “I’m trying to send a subtle message that one day at a time, we’ll all get through this. Maybe it’s not so subtle.”

In normal times, a cornerstone of recovery is the 12-step meeting, where alcoholics and other addicts commiserate and share their experience, strength, and hope. Some people attend one daily; others might do it weekly. But the routine, and the frequent contact with others, helps keep many people clean and sober.

Obviously, these are not normal times. Even before the statewide ban on large public gatherings, these meetings began to go away, as the buildings that hosted them began to close.

That was followed by a period of improvisation, as some meetings began to be conducted outdoors (with social distancing). With greater awareness of the urgency of social distancing, that’s gotten harder too. So, like many work meetings, many recovery sessions have moved to online platforms like Zoom.

It’s not the same, but it’s a vast improvement over no meetings at all, allowing people to maintain their networks, critical in this time of isolation.

Walsh’s recovery has never been a secret. In fact, he has never hesitated to use his platform as a public official to serve as an advocate for those in recovery. As the saying goes, he knows their pain.

“Alcoholism and drug addiction is a disease of isolation,” Walsh observed. “For someone with longtime sobriety, their whole way of dealing with addiction is interacting with people. Not having access to the program and the meetings is really difficult on people.”

Walsh said he has been supportive of holding outdoor meetings, as long as proper social distancing is observed.

“I think as the weather gets better and you can find an open space, that’s OK,” Walsh said. “I wouldn’t [serve] food or coffee; I’d just do the basic conventions of [Alcoholics Anonymous].”

Of course, how to hold a meeting in the time of COVID-19 is just part of a larger issue: namely, how to meet the needs of people at various stages of recovery.

Walsh stressed that recovery must be addressed like other medical issues that haven’t gone away because we’re in the midst of a pandemic.

“The work still has to go on,” Walsh said. “Getting people into treatment still has to happen. We wouldn’t shut a hospital down. We’re not shutting it down for people with cancer and diabetes.”

As has long been the case, Walsh spends part of every day counseling people in his own vast recovery network. He has encouraged the skittish to embrace the new idea of meeting online. He is telling people to continue to follow, as closely as possible, whatever they were doing before. He tells them to pray, if they do that, or to meditate. He encourages them to reach out to others in recovery — both as a means of offering service to others and to keep themselves sane.

“People in virtual meetings are still getting the message,” Walsh said. He added that he has begun attending online meetings himself.

And he stresses that this time of social isolation poses unique challenges for those with a history of finding their solutions in a bottle or some other substance.

He says he plans to continue spreading that message, knowing that those he means it for will recognize it. And, in truth, the unfamiliar isolation we’re living through has thrown most of us for a loop, not just people in recovery. Nearly all of us are grasping for a replacement for the social contact we took for granted a few weeks ago.

“Isolation from the coronavirus doesn’t mean isolation from society,” Walsh said. “We’ll get through this one day at a time.”

Read the original article from the Boston Globe, here.